Mike and Dave may have their names in the title, but it’s the girls that steal the movie. 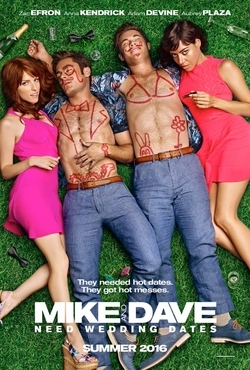 I think I’d like to see an alternate cut of Mike and Dave Need Wedding Dates that just focuses on Aubrey Plaza’s face in every shot. The master of deadpan, with eyes that never match a smile that suddenly lights up her face to lure a hapless guy… let’s just say she cracks me up. She, along with her co-stars Anna Kendrick, Adam Levine, and Zac Efron, are game for this goofy comedy that has as many big laughs as moments that fall flat.

Mike (Devine) and Dave (Efron) Stangle are two brothers that can’s seem to behave themselves at family functions, bringing disaster with them as they rile each other up and inevitably cause mayhem. Now that their sister Jeanie (scene stealer Sugar Lyn Beard) is getting married, their parents require the boys to bring dates to the wedding in Hawaii. Spotting the guys doing a TV interview for their quest, party girls Tatiana (Plaza) and Alice (Kendrick) sense an opportunity for a free vacation. Problem is, they have to present themselves as NICE girls to pull it off.

The setup of the story is presented from the get-go: Mike and Dave have met their match in Tatiana and Alice. The boys are totally being played, the girls are barely savvy enough to keep their cover. Let’s just say, they are all dumb as a box of rocks, and it is just a waiting game to see how disaster will strike, and who will be the unwitting victims.

Plaza and Levine, as the masters of deapan (her) and mugging (him) get the biggest laughs. Next to them, Efron and (more surprisingly) Kendrick play it straight, and actually have more of a sweet side story. Beyond the leads, side characters like the predatory bi-sexual cousin or the nice but dull groom or even the parents (including a surprisingly un-funny Stephen Root) drag scenes down. But credit goes to Sugar Lyn Beard as Jennie the bride, who nails some of the more hilarious moments. I had no expectations of this movie, but I have to admit some scenes were pretty hilarious. As there are no brains to be found in the characters, these are no-brainer laughs. When the joke hits, leave your brains at the door and enjoy it for what it is.

Extras on the Blu-ray release include commentary by director Jake Szymanski, an alternate storyline “Pig Sequence”, “Bits on Bits on Bits”, Funny or Die shorts, “Line-O-Rama”, plus a gag reel and deleted/extended scenes.