Minions? Unfortunately, more like “meh-nions.” While ambitious, the diminutive yellow underlings’ first big-screen foray as leading characters is proof that you can have too much of a good thing.
By Vickieon July 12, 2016
0 Comments
Our Rating 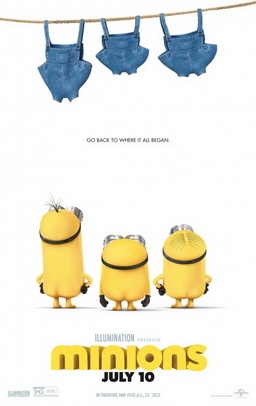 In small doses, as cute, globular supporting players in the Despicable Me films or shorts of their own, the Minions were entertaining. Watching their goofy, gibberishy antics for 90 minutes straight, though, becomes repetitive, tiresome and not nearly as fun as I’d hoped.

In this set-in-1960s-England prequel, three Minions – Kevin (the tall one), Stuart (the one-eyed one) and Bob (the bespectacled innocent with the teddy bear), all voiced by co-director Pierre Coffin – set out to find their depressed and directionless brethren a new evil boss to serve. See, history has left a trail of dead masters (including a T-Rex, a pharaoh, a vampire and Napoleon) in their obedient tribe’s incompetent wake, and without a master they are without a purpose. When our trio of heroes meets super-villain Scarlet Overkill (voiced by a miscast Sandra Bullock) on their reconnaissance mission, they immediately fall under her dastardly spell, eager to do her bidding… which, in the thinnest of thin plotlines, involves them stealing the crown of Queen Elizabeth (voiced by Jennifer Saunders) because Scarlet’s wanted to be a princess since she was little. (*yawn*) Endless Minion hijinks ensue.

But those hijinks, like much of Minions, feel uninspired and weirdly flat and lacking heart. Sure, they’re cute for a while, but simply dropping Minions into one setting after another after another – a department store! a dungeon! the Arctic! – so they can trip themselves up (again and again and again) in different ways is only entertaining for so long before you think, “Okay, filmmakers, we get it. They’re clumsy and not that bright. What else ya got?”

With an already meager storyline in place, I’d hoped that the film’s central villain might provide a little more oomph, but Scarlet is, in a word, boring. She’s barely in the film, relatively speaking, and – unlike other n’er-do-wells in other films like this one (most notably, the Minions’ most famous boss, Gru) – she’s not really funny or charming or interesting or even colorful. I kept thinking that an actress like Christine Baranski or Tracey Ullman could have had so much more fun with the role, and perhaps created a more powerful ally-turned-adversary for Kevin and company; Bullock (whom I love) is just… dull here. And supporting actors such as Steve Coogan and Jon Hamm don’t do anything noteworthy with their characters, either.

There are a few chuckle-worthy moments in Minions but, overall, it’s the kind of movie that young children will probably love because it’s big and simple. For the grown-ups in the audience, it’s one of those films that’s pleasant enough, and not a chore to get through, but not particularly memorable.