Facing another mission that we know is not impossible, Ethan Hunt and pals are stuck in a movie that never quite soars like the opening scene. 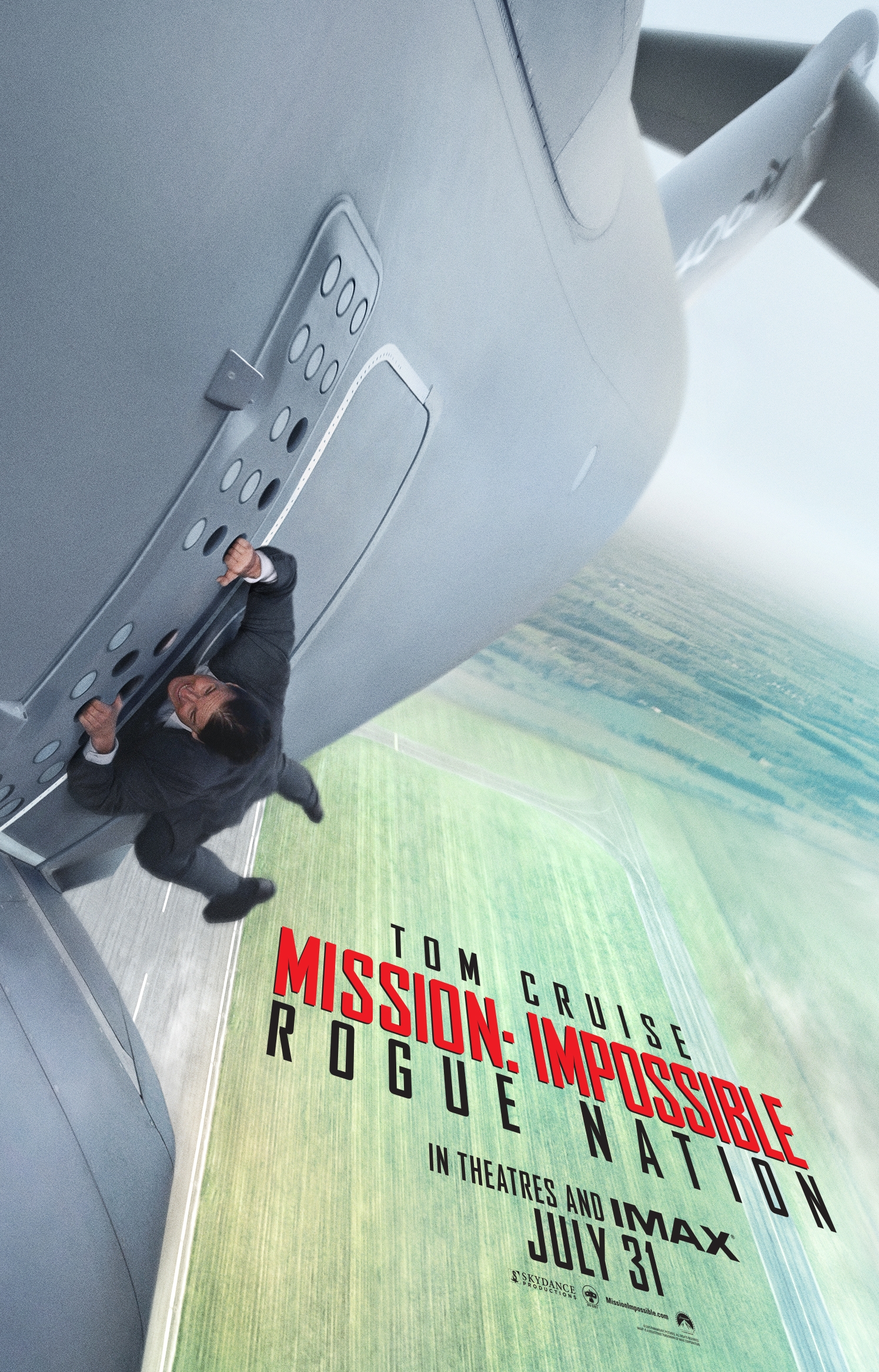 Here I was, looking forward to a Tom Cruise movie! After his highly enjoyable sci-fi flick Edge of Tomorrow, and the equally impressive Mission: Impossible IV (aka Ghost Protocol), I actually wasn’t ashamed to admit that I was pretty excited to see Mission: Impossible – Rogue Nation. Alas… well… (shrug)

Rogue Nation starts out well, with a fantastic scene of Ethan Hunt (Tom Cruise) clinging to the site of a huge cargo jet, waiting for earthbound tech-geek Benji (Simon Pegg) to simply unlock the door with his remote gadgets. When the plane takes off with poor Ethan holding on for dear life, cheeks rippling and feet losing their grip on the wing, well that is really Tom Cruise going for a ride. Apparently Cruise shot the scene eight times, most likely making the film crew wring their hands and triple-check their insurance policy. In the meantime, I was gasping and clapping my hands, thinking the film was off to a great start.

Unfortunately, that thrilling opening scene was an anomaly, rather than the rule.

Last time we saw the IMF crew, they blew up the Kremlin (oops) among other international carnage. So, it is not really a surprise that CIA chief Alec Baldwin suggests to a government panel that the plug be pulled on this rogue branch of spies. But the IMF isn’t the titular Rogue Nation! Turns out that there are dropout spies from all over the world, presumed dead, who are now helping out a waxy-faced madman (Sean Harris), who wants to (of course) take over the world and blow up all the things (or something). These rogue spies, known as the Syndicate, are so mysterious that even top officials think they are a figment of Hunt’s imagination. But we know better!

Rogue Nation has Ethan Hunt and crew not only trying to outsmart the terrorist crazies, but stay one step ahead of the CIA who is out to stop them as well. Lucky for us, Simon Pegg gets a pretty major role this time around (Ving Rhames, however, just shows up long enough to get paid). There is also an intriguing, shifty hot lady spy, Ilsa Faust (Rebecca Ferguson), who has the requisite skill of taking down the bad guys by leaping up and snapping their necks with her thighs (why do men never perform this move?). There are also a couple more thrilling scenes, including a barf-inducing, kneecap-wincing motorcycle chase in the hills of Morocco.

But now for the negative. Director Christopher McQuarrie may have worked on some nifty screenplays, but when his short directing resume includes the stink-bomb Cruise action-thriller Jack Reacher, well, it shows. There is a lot of chasing around trying to find the bad guy and figure out his motives. There is a backstage assassin-chase through the Viennese Opera, which feels like many other movies (including, very randomly, the Goldie Hawn comedy Foul Play, which I just rewatched recently). Jeremy Renner also gets a pretty big role, proving again that his acting is dull as a post. All the while, I kept scratching my head, wondering if the bad guy actor was actually (also) Simon Pegg, but clean-shaven. (It wasn’t.)

Sad to say, even the stunning locales just don’t pack the zing of previous movies. It’s hard to top hanging off the Burj Khalifa with only your sticky gloves, Mr. Cruise. I’ll just have to wait for the next installment to be impressed again.