Gorgeous art direction and a great cast can’t make up for the fact that Guillermo del Toro’s ode to film noir is an overly-long snoozer lacking spark. 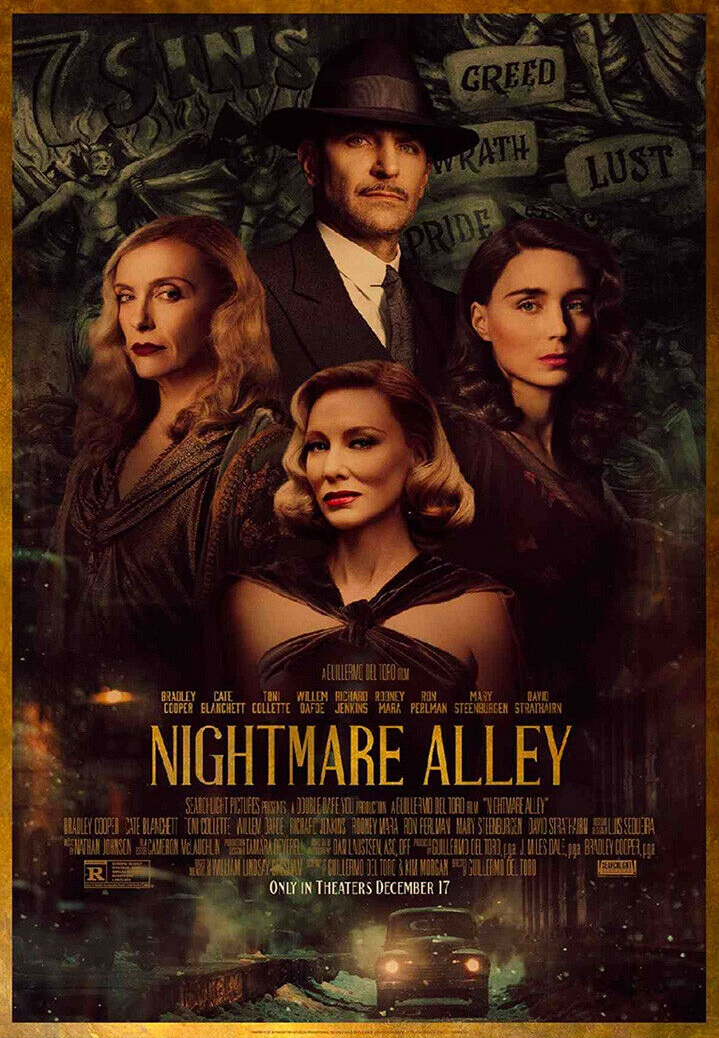 Guillermo del Toro’s Nightmare Alley is an undeniably gorgeous film noir, right from the opening scene. We see a man rip up the floorboards in a decrepit remote house, put a body into the floor, and light the whole house on fire. The flames and the pieces of the scene pop up as flashbacks as we get to know (sort of) the man who walked away.

Stan (Bradley Cooper) hops a train to nowhere, and drifts into a local traveling carnival. As a hired hand, he helps with a few projects, proves himself useful, and next thing you know he is part of the troupe.

The whole first half of the film is a movie in itself, as the seedy carnival atmosphere unfolds for Stan and the viewers. Zeena (Toni Collette) and Pete (David Strathairn) have been with the carnival a long time, so long that they no longer do the routine that was their gig: a mindreading trick that involved gullible audiences, some verbal cues, and other tricks of the trade that Pete keeps close to his heart in a weathered notebook. Stan wants to learn, seeing an opportunity learn a scam that could potentially go to the next level. But his carnival buddies warn him to not go the “spooky” route, pretending that he can commune with the dead. There is too much risk; too much harm.

By the time Stan leaves the carnival, with the “electrical girl” Molly (Rooney Mara) in tow as his sweetie, it seems like we’ve watched a full movie. But no, there’s more. Cut ahead two years, and Stan (with a crisp moustache, and Molly as his assistant) is playing a higher stakes game, using mentalist tricks on much more high-end city audience, raking in the dough night after night. But one night a dame in the audience (Cate Blanchett) publicly calls out Stan on his act. He weasels his way out with some tricks, but she’s got his number. Dr. Lilith Ritter, a sexy and scheming psychiatrist, has clients that are in demand of Stan’s skill of “speaking to the dead” (remember: don’t do it!), and these people have a LOT of money to throw at their grief. Stan sees an opportunity, much to the distress of Molly. Of course he goes for it.

This description makes the move feel more succinct that it really is. Despite spending a huge chunk of time in carnival-land, which is cast with more fantastic folks like Willem Dafoe, Ron Perlman, and a sad live-chicken-eating beast of man called The Geek, that world never feels like a community. Plus Cooper seems miscast: Stan has a mysterious persona but Cooper makes him seem like a blank, plus he is distractingly referred to multiple times as a “boy” (while Cooper is obviously a grown-ass 40-something man). He has little charisma in the role, and little chemistry with Mara… I mean, shouldn’t their relationship be, well, electric?

Cate Blanchett at least knows what movie she is in. With her cheekbones to die for, her perfect coif, and her severe suits, she is made to be a femme fatale. She also seems to be having way more fun than anyone else in the movie. The other standout is Richard Jenkins, playing Ezra Grindle, Stan’s big time target. A filthy rich man with soul-crushing guilt over the death of a long-ago mistress, he is possessed, dangerous, and more than a match for the sleazy Stan. Whenever Blanchett or Jenkins are on screen, the movie gets much much better, and much more interesting.

Del Toro’s choice to make a film noir, one that, it turns out, is actually a remake of a 1947 Tyrone Power film of the same name, is an interesting one. The director, as we all know, has visual style to spare and a reverence for the genre. But while the film is loaded with talent and boasts an undeniably visually arresting world, it seems that a key part of film noir was lost in translation: What should be delicious, dark, and messed-up fun is more of a snoozer.