I can fully appreciate the art and craft of Noma’s food creations, but I never really got the sense that the restaurant’s pieces of art tasted GOOD.
By Lindaon July 12, 2016
0 Comments
Our Rating 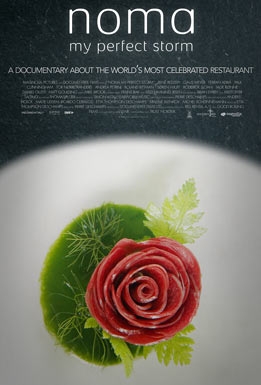 Entertainment has always loved a mad genius. Whether the person portrayed is a brilliant scientist, artist, or musician — these folks almost always makes for at least interesting cinema. We lowly folks want to know what makes a creative genius tick. Chef René Redzepi is one such mad genius, bringing a fascinating creativity that, some say, single-handedly put Nordic cuisine on the international foodie map with his Copenhagen restaurant Noma.

Three years in a row, Noma was named the “Best Restaurant in the World”, before it stumbled to second place, only to return triumphant again the next year at the top of the food chain. Noma: My Perfect Storm follows Redzepi and his restaurant during this tumultuous time, which included a disastrous norovirus debacle that made several dozen customers ill, and the never-ending quest to try to achieve an elusive third star in the Michelin guide.

Redzepi’s philosophy for Noma is truly pretty great: “Everyday serve a meal that tells people who eat with us where they are in the world, and what time of year they are in.” So, ingredients are always in season, and should (though the rules are sometimes bent) be able to be found specifically in the Nordic region. This is not easy, as expressed by a frustrated head chef who describes ordering blueberries (in season, found in Denmark) and getting at shipment from Italy. With the way the world’s commerce works, buying and eating local can be surprisingly difficult and complicated.

The most interesting parts of Noma: My Perfect Storm show Noma’s employees picking edible flowers from a roadside to include on the menu, or interviews with an urchin diver in Norway, or a mushroom forager in Sweden. This part of the documentary works best, and brings context to the vision of a dollop of yogurt on a plate sprinkled with local ants (!). There is also a touch of personal background for René Redzepi, the son of a Muslim Macedonia immigrant to Denmark. He describes the racism he has experienced, as well as the pushback for being an immigrant Dane, who is probably the most famous Danish chef. All of this adds a rounder context to the restaurant itself, and is quite interesting.

But, as I’m not a foodie, the rest of the documentary, which naturally swirls around the kitchen of the restaurant, was less interesting and long-winded. Redzepi narrates the film with his musings and philosophy, and we see beautifully photographed tiny plates of aesthetically pleasing food creations. Half the stuff, you literally have no idea what it is. The problem I found was that, sure, the plates of food look like works of art, but does any of this taste good? There are some critics included in the documentary that wax poetic about Redzepi’s genius, but, other than kitchen staff, there are no average folks, or even patrons of the restaurant itself, that are shown biting into this food and expounding on its tastiness. I can truly admire what Redzepi is trying to do, and I have been known to at least taste any food that is placed in front of me, but what I really wanted to know was if a dish sprinkled with ants was truly so tasty that Noma may indeed be the Best Restaurant in the World.