Like Church the undead cat, Pet Sematary should have been left on the side of the road the first time around. 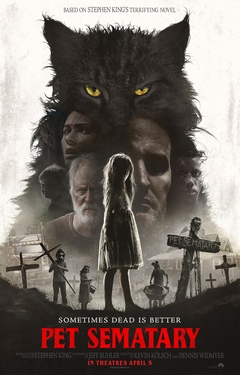 While watching the remake of Pet Sematary, I found myself thinking, “Was the original movie as bad as this? Or maybe the source material is terrible, and I just don’t quite remember…” After all, it pretty much has every Stephen King trope covered, from creepy woods to scary sounds to childhood trauma to horrific hobbling. I remember it as the ultimate in grocery-store paperback horror–everyone just ate the book up in high school. The idea of being able to bring back the dead has always been intriguing. But we know going all the way back to Frankenstein, that it is never a good idea.

A nice white family is moving into their new country house in (of course) Maine to get away from the scary and fast-paced life in the city. Louis (Jason Clarke) is an ER doctor, and his wife Rachel (Amy Seimetz) is a stay-at-home-mom to 8-year-old Ellie and toddler Gage. Curious about an earlier burial procession of some local kids, Ellie wanders deep into the land behind their house and finds a pet cemetery (misspelled on the childlike sign as “Sematary”). There she meets old man neighbor Jud (John Lithgow) who give her a dire warning, but he turns out to be a kind, lonely old man. (I don’t think kind, lonely old neighbor men that you meet in the woods exist in the movies any more, without being creepers, that is.)

When the family cat, Church, gets run over by one of the many huge tanker trucks just out on the road (foreboding!), Jud offers to help Louis hide the truth from the kids (tell them Church just ran away) by showing him a special spot in the woods beyond the pet cemetery. Does Ellie love Church? Yes. Does Louis love Ellie? Of course. Well, then he should do this thing that is a really really bad idea (double foreboding!). One dead-cat-buried-in-an-old-sacred-burial-ground is one kind-of-alive (but crusted with blood and filthy) cat showing up a short time later in his daughter’s bedroom. Church is back, but he is not quite the same. (Yeah, Jud should have mentioned that part.)

But you can’t just have an evil not-dead cat terrorizing the family. You just know that the dead pet is going to be one-upped inevitably by a dead human. How far would you go after a horrifying loss? Louis, against all reason, of course goes there, and the final chunk of the movie lets you know what a bad idea it is to bring back a family member via creepy-woods-magic.

The problem is, the stakes are only “bad horror movie” high. You can see the jumps coming from a mile away, and they aren’t even satisfying. The film plays a little with fans of the original film (and book), teasing with alterations to the story that don’t pay out like they seemingly should. And the only actor who rises above this cheese is John Lithgow, who at least throws extra earnestness into his role. You know he is doomed, but you kind of miss him when he is gone.

The ideas behind the story really should hold way more emotional power than they do. For instance, the recent Netflix series The Haunting of Hill House dealt with death and the aftermath very powerfully (and was terrifying in the process). But even as a popcorn scare, Pet Sematary is an uninvolving bore that seems twice as long as its run time. You may as well just watch the trailer for the succinct version. After all, it gives away the entire plot.