I overheard a women say about the star Kit Harrington: “You know, I really like him. I wanted him to be in a movie. But I wanted it to be a good movie!” 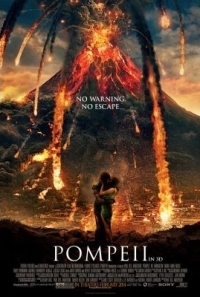 Cheeseball disaster flicks are a category unto themselves. They are all about spectacle and special effects: Volcanoes go boom! Meteors hit major landmarks! The earth opens up and swallows entire civilizations! And, almost always, the hero kisses the girl at the end, and the dog survives.

Pompeii rakes through history to find a spectacle worthy of a special effects extravaganza. The elements are right there for the picking: most of us are familiar with the ash-encrusted bodies, frozen in death’s embrace, petrified for millennia. Now imagine one was a slave! And one was a upper-crust lady! And they met cute, and fell in love, and then Vesuvius blew up! And… we all know the end.

The slave in this case is a gladiator known as The Celt (That Nice Jon Snow, aka Kit Harrington from Games of Thrones). After awhile, we find out that The Celt is actually named Milo (which distractingly makes you think of children’s movies). Milo has nice muscles, and is a horse whisperer, which charms the lady Cassia (Emily Browning) after he snaps the neck of a wounded horse with his bare hands (HOT). It doesn’t take long for Cassia to realize that she’d rather grope the muscles of a gladiator than to submit to the Roman Senator Corvus (Keifer Sutherland) who demands her as a bride. Meanwhile, the earth starts to open up, swallowing attractive slaves, and fireballs start to reign from the nearby awakening volcano. Let the games begin!

In movies like this, you are really just waiting for the action and carnage to begin. Luckily, Pompeii has a bit of both. Vesuvius is erupting, but like Billy Zane with a gun on the sinking Titanic, Corvus insists that his Roman army make a show of slaying the gladiators in the arena while walls are literally crumbling. Seems like a lot of energy wasted in sword and fist fights (and Cassia getting tossed back and forth between men) when fireballs are crashing through roofs and making people’s heads explode like melons.

In a movie that could be all camp, Harrington and Browning are very earnest, thinking this movie is better than it is. Keifer could have easily hammed it up a bit, making you wish for Joaquin Phoenix’s seething Commodus. The scene stealers are the burly, righteous gladiator Atticus (Adewale Akinnuoye-Agbaje) and Corvus’ evil right-hand muscle (Sasha Roiz). They seem to come from a much better film. They are both hot, relentless, and totally dedicated to slaying the other many times.

All you have to do is look at the poster for Pompeii, and you know exactly what kind of movie you are going to get. Nothing more, nothing less.