The strangest fiction is often based on truth, as portrayed in this crowd-pleasing, appealing film about opposites coming together for a common cause. 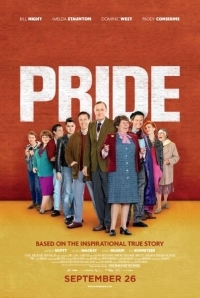 I have to say that if someone had just told me the idea of the story of Pride without any historical context, I would have thought it was incredible (as in not credible). I mean, a gaggle of gays from London (they are actually described as a “gaggle” at one point) decide to raise money and help out striking coal miners in Wales? It sounds like a mash-up of the working-class hits Billy Elliot and The Fully Monty, set to a gay dance club soundtrack of 70s and 80s disco (because the gays love to sing and dance). Ridiculous, right?

Well, the strangest fiction is often based on truth, and the story portrayed in this crowd-pleasing film actually happened in the 1980s, when a well-meaning group of gays and lesbians decided to focus their political fund-raising efforts on another group that was struggling under Margaret Thatcher’s rule, just like them. It was rather inspired for this group to select the striking coal miners, who were making the UK daily news not only for their protests, but for the fact that they, too, were getting carted off daily in police paddywagons, simply by exercising their rights. Perhaps these Welsh working class men had more in common with the urban gays than either group ever would have thought. Thus, the LGSM (Lesbians and Gays Support the Miners) group was born.

Pride is an extremely accessible film that paints the story in broad strokes. Though many characters are based on a real people (from a rabble-rousing miner’s wife, to Mark Ashton, the charismatic leader of the LGSM, to Jonathan, the flamboyant “elder” of the LGSM who is HIV positive), Pride gives us a token central coming-of-age story (Joe, a closeted, not-yet-legal 20-year-old, is on a journey of growth and self-acceptance), and a hiss-worthy villain (in the form of a bitter and homophobic miner’s widow in the Welsh village that the LGSM chooses to adopt). Still, when you throw in scene-chewing Imelda Staunton as a staunch, supportive villager, Bill Nighy, as a doddering, poetry-musing elder, and a talented cast of little-known actors as the LGSM, there is a lot of fun to be had.

Try not to get misty-eyed when the miners’ wives spontaneously stand to sing a traditional union song to support their husbands. Try not to get misty-eyed when a matronly Welsh woman wishes happy holidays in her native tongue to a gay Welsh man (Sherlock’s Andrew Scott) who hasn’t been to his homeland in 16 years after being kicked out by his mother. And shoot, I even got misty-eyed when a miner Cliff (Bill Nighy) waxed poetic about the most beautiful coal vein that runs from Wales to Pennsylvania–a vein that may as well run straight through a coal miner’s soul. This is a feel-good movie that could easily have had a feel-bad ending. But, I give the filmmakers full credit for highlighting the positive throughout, so that viewers can walk away not only with a smile, but with true inspiration.