OK, I’ll admit that I watched much of Quills through one eye. I had heard that this film was disturbing and graphic, but does that ever keep me away from a movie, especially when “smashing” Kate Winslet is one of the stars? Of course not.
By Lindaon February 8, 2014
0 Comments
Our Rating 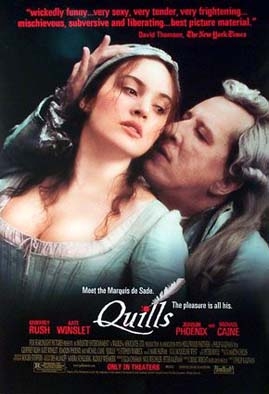 Now that I’ve finished vomiting in a bucket after seeing Quills, let me give you an idea of what it is about. It is Napoleonic times in France (that would be the early 1800s, for those of you who slept through your history classes), and the prolific smutty author the Marquis de Sade (Geoffrey Rush, totally having a ball) is in the loony bin. “Smut?” you ask. Yes, it was the Marquis de Sade who put the “sade” in “sadism” (aaah… I did not know that!).

While in the insane asylum, the Marquis’ writings become more popular than ever, as a lovely, luscious laundress named Madeline (Kate Winslet), sneaks his writings out to a publisher, while serving as the Marquis’ muse. This happens all under the nose of the brooding, handsome young priest (Joaquin Phoenix), who secretly, like everyone else living and working in the asylum, has a “thing” for sweet Madeline. In the meantime, the government is not amused by the popular success of the smut, and sends a stodgy doctor (Michael Caine) out to the asylum to see what’s up, and bring a stop to all the nonsense. Mayhem ensues.

Quills is the perfect example of what is wrong with the Motion Picture Association of America’s movie ratings system. For a film about the Marquis de Sade, there was surprisingly little sex. Oh, there was a lot of saucy talk, which was quite amusing, but I had the feeling that the MPAA probably drew a line in the sand about what could and could not be shown (remember the dark characters added after-the-fact in the orgy scene in Eyes Wide Shut?). So instead of sex, we get violence—both graphic and implied—and lots of it. And no, it was not necessarily sadistic violence, but violence for violence’s sake. It seems odd that the MPAA thinks that it is more healthy for Americans to have nightmares instead of sexy dreams as a result of what they allow us to see for art’s sake.

Quills is well-made, as obviously it will provoke a rise in viewers (no pun intended). But it is also extremely shocking. Its argument for freedom of speech is not subtle, but I think it is instead a stronger wake-up call for society and Hollywood to re-evaluate the effect of sex and violence in media on the entertainment-hungry public.