This may make me sound heartless, but Rabbit Hole left me as cold as Nicole Kidman’s famously frosty screen persona. 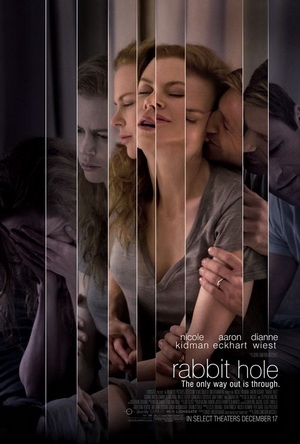 Becca (Nicole Kidman) and Howie (Aaron Eckhart) are a long-married couple dealing with the grief of losing their only child. Their 4-year-old son was hit by a car 8 months earlier while chasing the family dog across the street in front of their house. Dealing with their loss is ripping them apart as a couple, as they steadfastly try to keep together their otherwise perfect American Dream. They are beautiful, successful, have a perfect house, otherwise live in a perfect neighborhood, and Howie is a well-to-do professional in the big city. But the perfect dream doesn’t give instructions on how to deal with the ultimate devastating loss, so Becca and Howie are in limbo—in their lives, and as a couple.

Lest you think this is just a movie about two people together alone, crying separately while walking the dog or sitting in a parked car, Rabbit Hole thankfully offers doses of humor as well as surrounding players to break up Becca and Howie’s lives. The couple goes to “group,” where they have therapy meetings with other people who have lost their children. Becca calls bullshit on the idea that her child was taken by God for a reason, so bows out of the weepy group sessions, but Howie actually finds that talking to others helps… partly because his wife has shut him down. In the meantime, Becca finds herself stalking the teenage boy (Miles Teller) who accidentally struck and killed her son, and they form a tentative secretive friendship.

I felt distant from Becca and Howie’s characters… No, let me rephrase that: I felt distant from Kidman and Eckhart’s performances. Eckhart is an earnest and likable actor, but never seems to hit it out of the ballpark for me. And Kidman? Well, you either love her as an actress, or you find her a bit stilted and frosty. I’m the latter camp.

I realized how emotionally uninvolved I was with the characters when two supporting players showed up and completely stole their scenes from the leads, like effortlessly pulling a tablecloth out from under place settings. Dianne Wiest and Sandra Oh are just so damn good, that the moments they are on screen, they bring a real earthiness and reality to their characters. Sandra is a woman that Howie meets in “group” and she becomes his confidante and pot-smoking buddy. Her character lost a child years earlier, but she shows up to group out of habit—because she doesn’t know what else to do with herself. She is fabulous, and I wished that the camera would veer and follow her complex story instead.

Then there is Dianne Wiest, who plays Becca’s mother. She tells her angry daughter that it is OK to seek solace with God, and that she herself knows how Becca is suffering, as she lost her own (adult) child from a drug overdose. Wiest has a fantastic scene where she is asked by her daughter if the pain ever goes away, and she describes the weight of loss being like a brick you carry in your pocket for the rest of your life. The brick is always there, and you not only get used to it, but you know you’d miss it if it were suddenly gone. Wiest brings a much needed soul to the story, which is what I found I was yearning for in a movie that felt otherwise strangely emotionally distant for me.