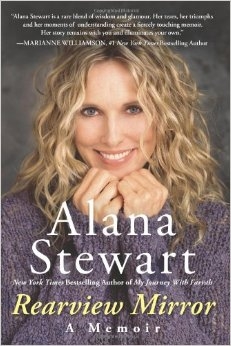 In 2009, George Hamilton penned the memoir Don’t Mind If I Do. This October, Rod Stewart spilled his life story in Rod: The Autobiography. What do the two have in common? Alana Stewart. Both men were married to the blond beauty, and she too has written about her life in Rearview Mirror: A Memoir. If you’ve ever wanted to hear three sides to the same story, here’s your chance!

The life of a model/TV personality with two hugely famous ex-husbands and a best friend who just happened to be Farrah Fawcett doesn’t necessarily seem that relatable from the outside, but Alana Stewart takes us back to her humble beginnings in rural Texas where her childhood was far from charmed. After growing up with an alcoholic and mentally unstable mother, Stewart left small town life behind to become an airline stewardess. Soon she was working as a model, hobnobbing with the rich and famous. A marriage to George Hamilton ensued and dissolved shortly after the arrival of their son Ashley, only to be followed by a marriage to Rod Stewart that was fraught with infidelities, inconsistencies, and disappointment. Though the union would beget two more children (Kimberly and Sean), the life of a rock-n-roll wife would prove to be far from glamorous. Its ultimate dissolution would send Stewart on a path of self-healing that would include years of therapy, soul-searching, and spiritual study. The end result is a refreshing level of self-awareness and a book that is both conversational and candid.

Though Hollywood serves as the backdrop to her life, Stewart is firmly rooted in reality. Her sons would inherit the same issues with substance abuse that her mother battled, and she would lose her dear friend Farrah to cancer in 2009. Throughout the book, Stewart comes across as a daughter, a mother, a wife, and a friend and seems to value these roles above all else. It makes sense then that her colorful career path has ended at the Farrah Fawcett Foundation, a role rooted in service and in preserving her friend’s memory. She recounts all of her trials in an open and honest tone, but without a trace of self-pity. Ultimately Rearview Mirror is a book about learning, forgiving, and moving forward, making it an accessible read for just about anyone.