He may be all limp and noodley by the end, but Rocky will prevail.
By Jenniferon December 27, 2014
0 Comments
Our Rating 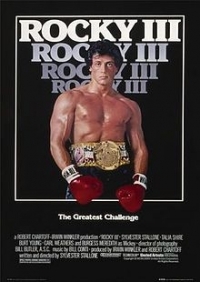 As Rocky III begins, we get a taste of the excess that defines Rocky IV. Years after taking the heavyweight championship from Apollo Creed, Rocky Balboa is on top of the world. He’s mastered the world of endorsements, appeared in countless magazines, and now resides in a mega-mansion with Adrian (who gets prettier with each sequel), Mickey, and Rocky Jr. In his free time, he takes part in charity events, including a particularly surreal boxing/wrestling showdown against Hulk Hogan. The only person not living it up is Paulie, who still struggles with an overwhelming sense of jealousy and entitlement. After an angry tirade, he finally asks Rocky for a piece of the action, and Rocky gives him a job.

Without question, Rocky has embraced life as a full-fledged celebrity. Corrective surgery has repaired many of his injuries, and he has continued to carry the heavyweight title for record time. He attempts to announce his retirement at the unveiling of a Rocky statue, but Mr. T has somethin’ to say about that. In fact, being Mr. T, he has A LOT to say about that, and I pity the fool who refuses to listen.

Clubber Lang (Mr. T) is a trash-talking wild man who insists that Rocky has kept his title through devious means. He challenges him again and again, but it’s not until Clubber insults Adrian that Rocky takes him up on the offer. Though everyone warns Rocky that fighting Clubber is tantamount to suicide, he approaches the whole affair with lackadaisical nonchalance. Even the training process becomes a media event complete with flashing lights, pulsing music, and blondes in tight shirts. All signs point to one thing: Rocky has gotten comfortable, and he’s gone soft.

When Rocky finally comes face to face with Clubber, it’s clear that he’s fighting an entirely different animal. Clubber isn’t a sportsman—he’s out for the kill. Sadly, the first victim of his wrath is Mickey, and when Rocky takes to the ring, you know he’s a goner. Worried about Mickey and totally off his game, this is the first time we see Rocky lose. But never fear—Apollo Creed is there to see him through! Mickey may have protected Rocky by arranging easy fights, but Apollo will help him get back the eye of the tiger.

This time the training montage takes place in Los Angeles as Adrian and Paulie look on. It makes no sense the way those two follow Rocky like shadows, but he’s certainly well supported. As Rocky learns to swim, runs on the beach, and throws punches with the hungriest young fighters, he regains his edge. By the time he faces Clubber a second time (to the tune of Survivor’s “Eye of the Tiger”—yesss!) it is a match of equals. Clubber may be stronger, but Rocky will always have more heart. He may be all limp and noodley by the end, but Rocky will prevail. Though not as cohesive as the first two films, the music alone makes you feel like buying a punching bag and taking a stab at world domination.