Luminous Audrey Hepburn is completely charming and adorable in this role.
By Lindaon February 17, 2014
0 Comments
Our Rating 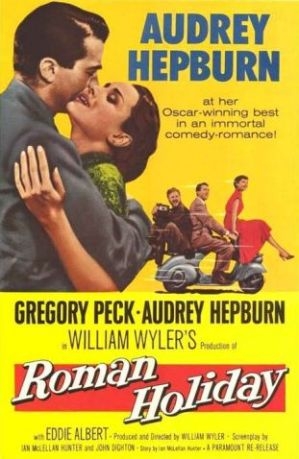 Audrey Hepburn is perhaps best-known for her stylish and hip performance in Breakfast at Tiffany’s—with her timeless Hubert de Givenchy fashions and long skinny cigarette holder (not to mention the song “Moon River”)—that forever cemented her image as a pop culture icon. But I’ve personally always thought that there was something cold about that film, with is selfish superficial characters… it just never grabbed me. I prefer Audrey in the movie that launched her as a superstar: the classic and timeless romance Roman Holiday. Her co-star Gregory Peck was so impressed with inexperienced Hepburn in her first major big-screen role that he suggested that the studio put her name (along with his) above the title in the opening credits. Paramount ended up with a huge hit on their hands, and Hepburn ended up winning an Oscar for Best Actress.

Roman Holiday is, when you get down to it, a fairy tale. We meet Princess Ann (luminous Audrey Hepburn, then only 24 years old), who is on a diplomatic tour of Europe. We never learn what country she represents, but she obviously has the star power and glamour of a young Princess Diana. Dignitaries are clamoring to meet her, and the press lines up to interview her in every city. But, to tell the truth, she is a bit fed up with her job. Schedules, schedules, schedules! Ann throws a hissy fit in front of her staff one night in Rome, and her doctor is quickly summoned to give her drugs to quell the hysteria. But she already has a plan… the lure of seeing couples dancing at an outdoor club across the street proves too tempting, and Ann slips out of the high-security palace for a night on the town.

Later that night, after gambling with the boys, American journalist Joe Bradley (Gregory Peck) stumbles across a seemingly drunk young woman passed out on a park bench. He tries to stir her, and tells her to go home, then finally gives up and puts her into a cab. Where’s home? The Colosseum. Okey-dokey. Needless to say, Joe can’t get a straight answer out of the young woman who is basically drooling on his shoulder, so he takes her home. Now, if this were a modern movie, such a move would be decidedly creepy, but in the good old days, you could apparently wake up in a strange man’s pajamas and take his word that you weren’t molested—especially if you were wearing the pajamas of someone as hunky and well-dressed as Gregory Peck.

Anyway, it doesn’t take Joe long to figure out that the mystery woman in his flat is actually the visiting Princess Ann, whom he was actually scheduled to interview… that is before he accidentally slept in, and before the “real” Princess Ann’s “mysterious illness” forced the palace to cancel all appearances. But Joe, as a good journalist, realizes that he has fallen upon a scoop like no other. He invites his photographer buddy Irving (the amiable and funny Eddie Albert) to tag along while Joe and “Anya” take a “day off” and see the town.

Audrey Hepburn is completely charming and adorable in this role, as she takes such pure, unadulterated pleasure in such everyday things as eating ice cream, getting a haircut, playing tourist, and riding a scooter. In fact, Roman Holiday is like The Princess Diaries in reverse: the princess gets to see how the other half lives, and, since this is the movies, finds that it is all so positively fascinating and charming to mingle with everyday folks. Peck’s job is to basically be charming on the surface, crafty under the exterior, and slowly melt under Audrey’s charms until he makes the decision to protect Ann, rather than exploit her. He is ruggedly handsome, and, I might add, looks fantastic in a suit. Some naysayers believe that Cary Grant should have been cast as Joe, but I think that would have made Roman Holiday a completely different movie.

But, like all fairy tales, the fantasy must come to an end, whether it be at the stroke of midnight, or when men in suits finally recognize the princess and try to take her back to the palace. Both Ann and Joe have to make a decision, and for each, it may not be the decision they want to make. Unlike a modern film, Roman Holiday dares to end on a realistic note that still manages to be utterly romantic. The final glance between the two leads will make you a little weepy, but at the same time it offers enough hope for the characters that you can mentally write your own sequel. Swoon-worthy, indeed.

The Centennial Collection edition of Roman Holiday comes with an entire disc full of extra features. “Audrey Hepburn: The Paramount Years” profiles her career under the studio (in this case, lucky for them, she made her most famous pictures for Paramount, including Sabrina and Breakfast at Tiffany’s); “Rome with a Princess” shows that the picturesque on-location shooting of the film in Rome basically made the city into a star in itself; and “Remembering Audrey” has more personal reflections about the actress, from her son with Mel Ferrer, Sean Hepburn Ferrer, who discusses, among other things, her role as a United Nations humanitarian in her later years. “Restoring Roman Holiday” features the painstaking process of restoring degraded films (versus simply preserving them), and how digital film has revolutionized the process. Most interesting, perhaps, is “Dalton Trumbo: From A-List to Blacklist,” which profiles screenwriter Dalton Trumbo (who was not given screen credit for this film, and saw the Oscar handed to Ian McLellan Hunter). Trumbo was blacklisted as a communist in the McCarthy era, but continued to write celebrated screenplays (like Roman Holiday) under various pen names. Apparently, the Blacklist eventually collapsed after Kirk Douglas hired Trumbo, with full credit, to write the screenplay for Spartacus, and effectively, and single-handedly, collapsing the ban with his influence. Go, Kirk! 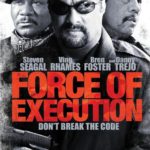 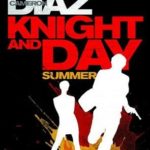