On the surface, this is a police procedural. But I don’t know the last time that I saw such an acclaimed cast completely bring it for a change, making the story completely enthralling. 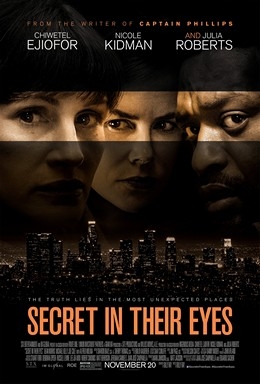 When it comes to Hollywood remakes of acclaimed foreign films, I admit I’m usually one of those purists that shakes my fist in rage that the original was better! Learn to read the g-d subtitles, lazy Americans! You are missing so much! Lucky for you, and, more importantly, for the Americans involved in this remake of the Oscar-winning Argentinian film El secreto de sus ojos, I went into this film not having seen the original. And I have to say the original must be outstanding, because I really really liked this film.

I don’t know when the last time I saw a cast–especially such a well-known cast–with such natural chemistry. Within the first few minutes of the film, I totally believed that FBI agents Ray (Chiwetel Ejiofor) and Jess (Julia Roberts) were co-workers with a fond, playful friendship. Their office banter, especially in the face of the grim job of monitoring potential terrorist activities from their LA office, was completely believable. Even perhaps more surprising, I believed that Nicole Kidman, as the new office attorney, had a warm personality, and was the worthy target of Ray’s office-crush. Who knew? All this in a few minutes.

Which makes the scene where the team goes to the local mosque to find that the murder victim dropped in a dumpster is actually Jess’ teenage daughter all the more devastating.

Secret in Their Eyes jumps from that moment in 2002 to 13 years later, when Ray, after exiling himself away from the tragedy, returns to the old office, and to Jess and Claire, to proclaim that he has found the killer that avoided arrest for murder all of those years earlier. His search for the killer was obsessive, seemingly eclipsing Jess’ own grief of losing the light of her life. The murder basically stopped the relationships between Ray, Jess, and Claire in their tracks, so they are all hesitant to open themselves to revisiting that part of their lives again as they pursue Ray’s lead.

Secret in Their Eyes has twists and turns that, for the most part, work (though I admit I lost the trail a little bit at the end before the plot spun to the big reveal). But what kept me interested in the story was not necessarily the mystery, but the acting. Wow, they were all so good, from the leads to the supporting cast (a special shout-out goes to scene-stealer Dean Norris as an agent named Bumpy). On the surface, the plot may be the equivalent of your favorite television procedural, is the great performances in Secret in Their Eyes that give the film soul.