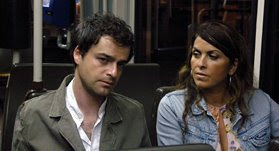 I was pretty excited about the film selections I had lined up for my first couple days of true SIFF’n (Opening Night doesn’t really count). On Friday night after work, I caught Fatih Akin’s The Edge of Heaven (Auf der Anderen Seite). Akin is featured as one of this year’s Emerging Masters, which is usually a good sign, and I’ve heard wonderful things about his film Head-On (which is also featured in the fest). Heck, I even got excited about the trailer for this film. But The Edge of Heaven (5/8) despite a lot of great qualities, didn’t really grab me and spin me around like I was expecting.

The film is a collage of different characters whose lives are all only a degree or two apart, though they don’t realize it. In Germany, an old Turkish man frequents a prostitute who turns out to be Turkish also. He is a widower, so offers to pay her to live with him, and sleep with him only. Alas, the old man’s adult son Nejat (Baki Davrak) isn’t too thrilled with his and his dad’s new domestic situation. An accident changes everything, however, and Nejat finds himself traveling to Turkey to search for this woman’s missing daughter. The daughter Ayten (Nurgül Yesilçay) has her own plot line. She is on the run for being part of a radical political group in Turkey, ends up in Germany, finds a woman lover, then ends up in jail in Turkey after being deported. The stories end up criss-crossing, and the acting overall is fine, but I was a little disappointed that I wasn’t more emotionally involved in their lives. I was intrigued by Baki Davrak’s performance as Nejat, and found his character the most curious and interesting, but alas he was only one part of the collage. Overall, it was one of those movies that I admired rather than really enjoyed. 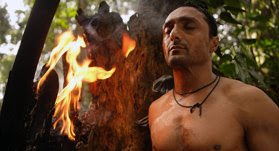 So maybe I would have better luck with Before the Rains (5/8) on Saturday morning. As the opening credits unfurled, things were looking good: A Merchant Ivory production! Linus Roache! Nandita Das! And the lovely Jennifer Ehle, who has been sorely missing in action lately! The story takes place in 1937, in British India as things are really starting to heat up. Roache is a white plantation owner named Henry Moores who has big plans for the countryside, but the local village is getting riled up with anti-British sentiment. His right-hand man T.K. (Rahul Bose) is Indian, but is completely loyal to his boss, whom he considers his friend. But the exposure of the (married) Moores’ affair with his (married) house-servant (the always-lovely Nandita Das) tests the friendship between the two men, and exposes the true relationships between the British occupiers and the local Indians. British-India is a fascinating era for drama, and the film certainly looks lush and gorgeous. The acting is overall fine, but if anything, the film is predictable and is not as gut-wrenching as I was expecting it to be. It was all very… expected.

So, grumbly, I thought that The Home Song Stories (4/8) would renew my faith in my ability to choose great movies. I had heard about this film when I was on vacation in Australia in November, as it had just won a slew of the top Australia film awards. That could a) be a good sign, that it was the best of a good year in film, or b) not mean anything at all, that it was an OK film in a year of crappy selections. You can see where I’m going with this…. 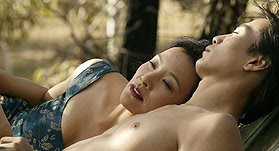 The ageless Joan Chen plays Rose, a nightclub singer in Hong Kong who hops from man to man (with her two kids) until she meets an Australian sailor, whom she follows to Australia. They get married, then she leaves him. She and the kids live a transient life for several years, then end up back in Melbourne where he (“Uncle Bill”) takes the wife back. Alas, he is out on his ship for months, so Rose gets into hanky panky with the much younger Joe (Yuwu Qi). They set up house in her husband’s home (with mother in law scorning on the sides), and all hell breaks loose in no time. This is a bleak family drama, where mom is unhinged half the time, and trying to kill herself the rest of the time. I mean, really, I think there are three or four failed suicide attempts among the characters until, well…. Despite the film’s obvious earnestness (being based on a true story, that always makes me feel a little guilty), it was a bit of a drag. Dramatically it went on and on, and the inevitable conclusion came as a bit of a relief, not only to some of the characters, but to the audience as well.

Luckily, as it was a matinee, I could leave the theater and enjoy a beautiful, sunny, late-spring day for some rejuvenation, before jaunting off to meet with pals for eatin’, drinkin’ and pool playin’ to restore my faith in humanity. Hopefully I’ll have better luck with my movie selections soon.