My screenings this second weekend of SIFF were admittedly light. I have to admit, my emotional energy (and excitement was focused on my Saturday Girls (and Boys) Night Out to eat, drink, then go see the new Sex and the City movie. Adults have to have some fun, too! In the meantime though, I managed to see a couple of teen-centric films at SIFF….

First up was American Teen (7/8), arriving on the wave of its success at Sundance. There were actually studio-types at this Saturday morning screening, wearing silly sheriff’s badges hanging around their necks (ooo! scary!), plus we were warned they’d be scanning the audience with night-vision goggles or something during the screening. Whatever. As for the movie, American Teen is pretty fabulous. 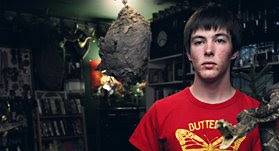 Documentary filmmaker Nanette Burstein followed a handful of high-school seniors for the last year of school in small-town Warsaw, Indiana. In this one high school town, basketball is king, and the reigning prince is jock Colin, whose family is not as well-off as many in the town, so he’s under pressure to play well that year to get a basketball scholarship. Hannah is the alterna-girl freak (to some at least), meaning she is artistic, funny, creative, and wants to break out of town when she graduates. Unfortunately, a boyfriend breaks her hear first, spiraling her into a month of depression and anxiety where she practically drops out of school. Jake is a band-nerd who wants a girlfriend more than anything, though he often shoots himself in the foot with his self-esteem issues. And finally Megan is the princess, and in the film, the mega-bitch. Yikes. Remember the mean girls from high school? Well, that’s Megan. The film is funny, cringe-inducing, and occasionally heartbreaking, playing like a real-life re-enactment of The Breakfast Club (with a marketing campaign to match).

Sex and the City Night proved a great success (not that you asked), so I took it down a notch on Sunday and just caught one film. OK, well I actually attempted to see another film, Time to Die (Pora Umierac), which I’ve heard good things about… but the truth is, I didn’t have my butt in gear and got there about 5 minutes too late. I didn’t want to be THAT PERSON, coming in late, trying to find a seat in a darkened theater. I learned my lesson last year (see, Vickie?). So instead, I loitered in places like The Gap , Old Navy, and Value Village, touched a lot of things without buying them, then went to a coffee shop for an hour and read a book. 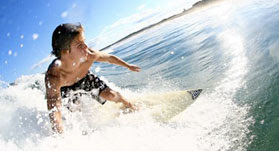 My only film selection today was Newcastle (4/8), a surfer-boy movie from Australia. If you want to look at pretty, tan, muscular white boys with sun-bleached hair, this is the movie for you. If you want to see astonishingly gorgeous photography of surfing, the film has buckets to offer. But if you want to spend your time with a main character and his friends that are almost all a bunch of pricks, well, that’s Newcastle for you. Seventeen-year-old Jesse is a self-absorbed and apparently very talented surfer, like his older brother Victor had been, but Victor washed-out, and is now a mean loser. Jesse misses a spot (by one slot) on the local team that would be his ticket to getting discovered in the competitive circuit, and he sure can’t seem to accept that the other guys might have been better. On top of that, his goth weakling brother Fergus seems to have a crush on Andy, one of Jesse’s pals (perhaps Jesse’s only friend who isn’t an asshat). Jesse, his pals, and tag-along Fergus go on a beach camping trip for sun, sex, and surf, but when Victor and his thuggish surfer-pals show up to spoil the party, well, something bad happens. It is too bad that the film focused on selfish Jesse, who was almost completely unlikeable. I found sweet Fergus’ infatuation with the friendly Andy to be a much more engaging (and less predictable) subplot. Plus, I have no idea who did the actual surfing, but not only was Andy a more pleasant character, but I found his style of surfing to be the most captivatingly gorgeous. Everyone knows that I kinda loved the surfer movie Blue Crush… but let’s just say Newcastle is no Blue Crush.

[FYI: Bear with me, readers. I’ll be taking a couple days off from SIFF now, you know, to catch up on things, life, and whatnot. But I’ll be back, catching more movies later this week! Mark my words!]