SIFF 2009: Auto-erotic asphyxiation (not me!) and takin’ a couch day

Are you ever just tired at the end of the work week? You know, like really really tired? Cancel your social plans tired? “Please, you guys should go out anyway without me…” tired? I knew I had a big-ass frosty microbrew in my fridge that had been beckoning for a couple weeks. One of those “fancy” beers that you want to save for a special night. Well, Special Night hit on Friday night, which became Beer on the Couch Night. Couch Night actually extended to Couch Day on Saturday. I did manage to watch about 8 episodes of Weeds, and a BBC crime thriller, and take a nap. OK, two naps. 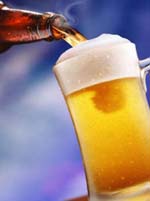 So, yep, I’ve been tired lately… but I promise you, I’ll be making it up with my SIFF’n this last week. Better late then never.

At the end of Couch Saturday, I did manage a spontaneous SIFF flick on the way to a bowling party (that ended up getting cancelled). S and I decided to see whatever was playing around six-ish, so decided on World’s Greatest Dad (4/8), directed by Bob(cat) Goldthwait and starring Robin Williams. The Egyptian was packed to the rafters, and producer Jennifer Roth introduced the locally-made film, and asked cast and crew in the audience to stand up. With a big rush, I swear about a third of the audience stood up, excited and delighted to be there. Such is the fun of Seattle-made films debuting at the fest, however, considering the work and dedication put into the film locally, you’d think that either Goldthwait or Williams would be here to present it. Alas, no. 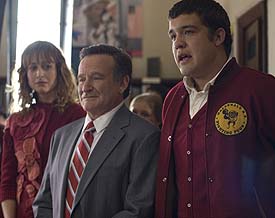 Robin Williams plays Lance, a high school poetry teacher who is also a miserably failed writer. He seethes with jealousy as his young, handsome co-worker gets an article published in the New Yorker on his first try and their co-workers swoon over his success. In the meantime, single dad Lance deals with his wretchedly horrible teenage son Kyle (Daryl Sabara, who has an icky, sweaty sheen at all times), foul-mouthed, obnoxious and mean kid, whose main hobby is masturbating. One evening, Lance comes home to find Kyle accidentally dead from auto-erotic asphyxiation (which had an interesting timeliness as David Carradine’s death was in the news just a couple days ago). To make the accident less embarrassing, Lance types up a moving suicide note for his kid and hooks his kid up in the closet before calling 911. Turns out that the suicide note gets published in the school paper, making Kyle not only a super-popular dead kid with his peers that hated him, but Lance suddenly becomes the most popular teacher for being the dad of such a sensitive kid.

The audience, of course, ate it up, mooning over the film that they had worked on, which they have every right to. As an objective viewer, I, however, found the story kind of clunky and long despite only being 90 minutes, and couldn’t help but think that Heathers had a similar idea, but did it better. There are some darkly funny bits, (Williams and Sabara are fine), but it couldn’t seem to get its footing whether it wanted to be a broad black comedy, or a sad commentary on a lonely, desperate dad feeding off the pity of others.