So has anyone noticed that the SIFF tables and main ticket booth aren’t selling any festival schwag this year? No T-Shirts, posters, silly lunchboxes… nothin’! I mean, charging $10 for the program (over $5 the previous years) was surprising, but not really unexpected. But the poor ticketing tables look so sparse and lonely with no goodies to pick through (and I think that the stark silhouette theme of the marketing would have looked cool on T’s). Oh well. I’ll bet they are tightening their belts like everyone else…

So, as usual, the fest shows trailers and ads before the films, to appease sponsors, market other flicks in the fest, and tell people to shut their pie holes and/or not text during the film. A particularly humorous thing happened at my afternoon screening of Chef’s Special. A trailer for the documentary El General was shown, since, it is after all a Spanish-language film that might appeal to the audience planted at the moment in the theater. The audience patiently watched the trailer, which was then wrapped up, as trailers usually are, with the name of the director, the title of the film, and it’s random awards. At that point, a perturbed and exasperated woman in the audience said intentionally loudly, “This is the WRONG MOVIE!” And, as though on cue, over a dozen people from all throughout the auditorium answered just as loudly, “IT’S A TRAILER!!!” (cue burst of self-satisfied laughter) 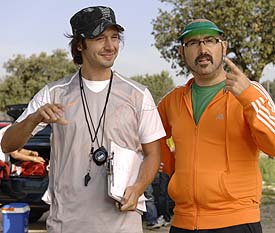 That set the tone for the gay Spanish comedy Chef’s Special (Fuera de carta) (4/8) a more comedic take on what is basically the exact same story as the German film Mostly Martha (aka the US remake No Reservations). A harried restaurant owner named Miki (Almodóvar alum Javier Cámara) is a harried single gay man who suddenly inherits his own two children when his ex-wife dies. In the meantime, a super-cute celebrity futbol player named Horacio (Benjamín Vicuña) moves in next door. Maxi’s fag-hag best pal and maître d’ Alex (Lola Dueñas) has her eye on Horacio, but it ends of being Maxi that grabs Horacio’s interest and lust. Chef’s Special feels like Almodóvar-lite: the comedy is broad, the chef is flaming, and political correctness in the script is absolutely nowhere to be found. The audience ate it up, but after the credits, I heard a guy complain that it was “too slick”. It is very sitcomy, full of purposely shockingly offensive jokes and no love scenes to spark it up (probably because Maxi and Horacio had very little chemistry). But, like I said, Benjamín Vicuñ as Horacio was super-cute, so I’m posting his photo to moon over (he’s on the left). 🙂 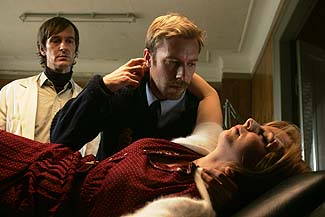 Luckily my next flick was one that will make my short list of Best of the Fest: Terribly Happy (Frygtelig lykkelig) (7/8) an unexpected, terribly good film noir from Denmark. Robert (Jakob Cedergren) is a big city cop from Copenhagen who has been reassigned to a small town in no-man’s land of southern Denmark. It is so flat and marshy there, that the boggy land is known to saturate and swallow whole cows… as well as the weird small town’s secrets. The locals are odd, especially a femme fatale who immediately sets her sights on bedding Robert, despite the fact she has an abusive thug of a husband who is known to not only beat her, but break the limbs of others left and right. Getting involved with her is obviously a bad idea, but Robert may not be the innocent good guy that he seems.

Terribly Happy has the dark mood of a Coen Brothers or David Lynch noir, where things go from strange to bad to much much worse within a few scenes. But it is all told relatively calmly, under the eerie gray northern light. When things shift in the story at about the halfway point, you could hear the audience murmur in surprise and appreciation as the film unfolded in unexpected ways. Let’s just say, a bog is a good place to get rid of people, but the problem is, they stay there for a long, long time (see this famous Bog Man).