SIFF 2010: Nowhere Boy and the middle of nowhere

After my first-night fiasco of standing in sludgy ticket lines and losing tickets (dang!!!), I vowed to go straight home and sort out at least *some* of my schedule, ordering a bunch of my “for sure” screening tickets in advance. There! A good dozen printed in hand, at least I can now breathe a bit easier as I sort out other flicks to check out (I like to play the festival by ear, listening for the buzz as the fest rolls along). 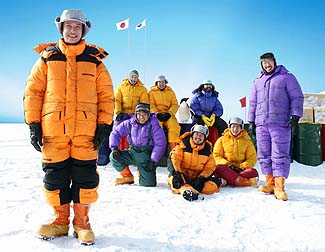 On Saturday, I only checked out one film (pesky life sometimes gets in the way of movies, doesn’t it?)… but it was a cute one. The Chef of South Polar (Nankyoku ryôrinin) (6/8) combines two of my favorite things: Japanese food and Antarctica. Can you say, target audience (with big neon arrow pointing at my head)? The titular chef (the adorable Masato Sakai) is a sweet young family man who takes great pride in his cooking. When he gets sent by the Navy to a Japanese Antarctic research station, he has a captive audience of 7 others to cook for for a year… but it quickly becomes clear that his cohorts might not hold the same reverence for food as he. Chef is basically a sweet little comedy about food, living with others, and living away from loved ones in a completely isolated spot. It is also enjoyably funny, and gets extra points for the completely original scene of a man in a puffy snowsuit running across the ice plains with a hunk of flaming meat on a spear. (And yes, I had to go out for Japanese food afterward.) 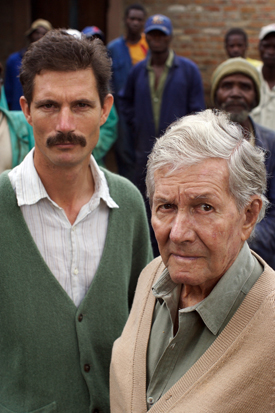 Sunday morning, I chose a film based entirely on the theater, and ended up with an extremely powerful documentary Mugabe and the White African (7/8). In Zimbabwe, dictator Robert Mugabe has had over 4000 white-owned farms seized in recent years by the government for “redistribution” to the poor black Africans (at least that is what the official word is). The film follows 75-year-old white farmer Mike Campbell and his son-in-law Ben Freeth as they fight the seizing of their Mount Carmel farm (purchased by Campbell AFTER the democratization of the government) in an international court in Namibia. The flagrant disregard of international law by Mugabe’s government is astonishing (with postponements, and even a dismissive court walk-out). But it is really a character study of these two white men just trying to keep the land (and their 500 employees) from being seized (then basically destroyed) by the racist government. My only complaint about the film is that it was missing some historical context of the race relations and power in the country (another farmer was kicked off her land that had been in the family for 100 years… but how was it obtained 100 years ago?). But Mike and Ben seem like such good, honest, and humble men (I was kind of crushing on Ben), that it makes the horribly-wrenching-to-uplifting conclusion of their fight all the more heartbreaking when you read the simple postscript at the credits. I wasn’t the only one in the theater crying through the last half hour. 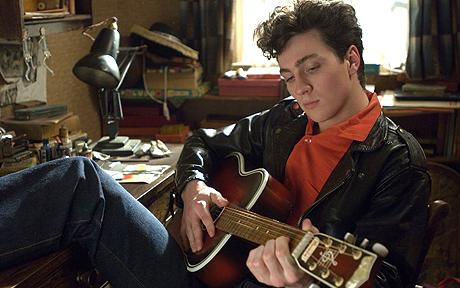 My second and last flick of the day was the murmured-about Nowhere Boy (6/8), which is an entertaining and sometimes sad depiction of the teen years of John Lennon. Because the lead actor (Aaron Johnson) doesn’t really look like Lennon, and because there is a notable lack of wink-wink Beatles references (though it opened with the single, recognizable chord of the beginning of A Hard Day’s Night), it easy to slip into watching it as just a drama about a kid learning about his effed-up family secrets. Raised by his aunt Mimi (Kristin Scott Thomas, stern and frosty as usual… rrrowr!), John finds out that his freewheeling birth mother Julia (Anne-Marie Duff) actually has just lived down the road the whole time. He seeks her out, and they have a notably weird mother/son reunion that seems more like the flirty girl getting a new boy toy. Ew. But John, being a bad boy who starts ignoring school for thrills, girls, and (yes) rock n’ roll, gets off on having this cool, party-girl new mom. Well, at least for awhile. Beatlemaniacs may chomp at the bit for more, well, Beatles stuff (Like the tease of: Ooo! There’s The Cavern! … but only from the outside), but as a character study, it is worth watching. And, I have to say, whoever decided to cast Kristin Scott Thomas and Anne-Marie Duff as sisters… brilliant!

There is always inevitably a week during SIFF that I get busy busy busy. So don’t be alarmed, but I’ll be pretty much taking this week off to deal with things, life, and whatnot. My next scheduled flick is Friday, so see you in line!

PreviousSIFF 2010: Splattering blood and sex dollsNextSIFF 2010: Older and wiser women, and pretty smart young ones, too