SIFF 2010: Wrapping up the fest with AssSwords and Artificial Intelligence

When the last day of SIFF arrives, it is a cross between a mad scramble to use up vouchers and see as many films as possible (in the past, I’ve seen up to four movies on the last day), or relaxing, calling it good, enjoying the weather, then topping off the day with a couple of flicks. This year I chose the latter. 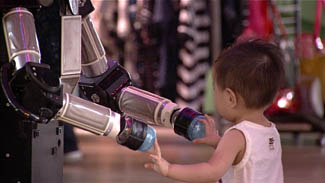 Among the TBA movies announced was my last screening, but I’ll get to that in a second. The only movie I could really fit in before that evening show, my last hurrah if you will, was a documentary called Plug & Pray (6/8), a fascinating and a little bit quirky examination of the past, present, and future of artificial intelligence. Science geeks are almost too easy a target to make into humorous subjects, but director Jens Schanze has a hint of the style of Errol Morris in that he holds the image of an uncomfortable scientist in front of the camera a little bit too long, inevitably drawing giggles from the audience. Of course, such tricks aren’t necessary when one inventor starts pinching and slapping the cheeks of his robot doppleganger in a serious demonstration to show how the robot is different from a person. (Seriously, this same guy suggested that his robot could be left at home to play with his kids and watch TV on the couch while he himself was on business trips. Ew.) But my big crush of the movie was Herr Joseph Weizenbaum, a muppet of an elder German gentleman, who was a professor of computer science at many esteemed universities including MIT. His critique of the movement towards artificial intelligence (and the elevation of it as the end-all, be-all) as a philosophical argument was absolutely fascinating, and I wished I could sit down with him for a cuppa. Alas, Weizenbaum died during the filming of the documentary. But his presence shakes up the idealization of a computer-automated world, and he really made me think.

My last film of SIFF did not make me think. It made me laugh, and that was the whole point. RoboGeisha (6/8) has one of the best movie trailers I have EVER seen, and the film did not disappoint. RoboGeisha will never win any critics awards, but it delivered exactly what it promised: a Giant Robot Castle (marching up Mt. Fuji), machine-gun boobs, armpit blades, revolving-saw jaws, breast milk from hell, and the “embarrassing” AssSwords. Throw in hilarious campy dialogue like, “I’ve been cut by a hand!” and “I did not expect to turn into a tank!” and you’ve got one of the most fun midnight movies (that I’ve seen at 8:30) in ages. Good, not so clean fun! Now, everyone, cup your hands around your mouth and say in your deepest, most ominous voice, “ROBOGEISHAAAAA“. 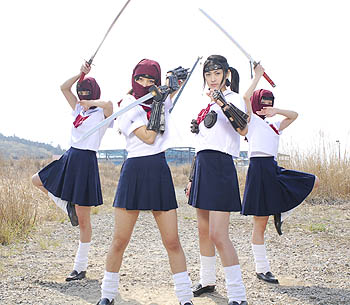