Singin’ in the Rain

For a movie with rain in the title, Singin’ in the Rain is one of Hollywood’s sunniest classic musicals.
By Lindaon September 25, 2012
0 Comments
Our Rating 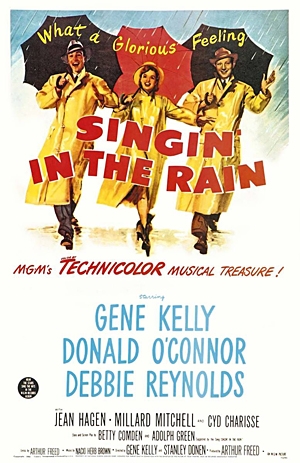 Like spinning in a field to evoke The Sound of Music, dancing in mud puddles and crooning “I’m singin’ in the rain, just singin’ in the rain!” is such a part of pop culture that you don’t even have to have seen the movie to know the songs from one of the greatest American musicals. But if you skip this gloriously happy and funny classic, you are sure to miss out.

Gene Kelly is at his peak playing Don Lockwood, a popular silent actor (along with his screen partner Lina Lamont, played by Jean Hagen) that is pushed into the world of sound films. Alas, Lina’s voice is jarring when it comes to transitioning to sound and Don and the crew are in a conundrum. When Don meets perky young Kathy (adorable Debbie Reynolds), Don and his buddy Cosmo (Donald O’Connor), decide to dub Lina’s voice with Kathy’s. This is all good, except Lina’s ego gets in the way, and romantic tensions ensue as Don finds himself falling in love with the sweet Kathy.

The film is made up of scene after scene that has made it into the iconography of American film. There’s the great Donald O’Connor as the sidekick Cosmo, whose amazing physical comedy, not to mention athleticism and dexterity in the “Make Em Laugh” scene is truly mind-boggling (I can only imagine his bruises after that take!). Then there’s Gene Kelly dancing in a fantasy-like sequence with Cyd Charisse, where she is barefooted and in white, with a long ribbon of fabric soaring to the skies. There’s Gene, Debbie, and Don singing the ridiculously catchy “Good Morning”, which always makes me want to rustle up some eggs and coffee, and throw open this windows at the start of a summer’s day. And who can forget The Green Dress? Sexy Cyd Charisse, as a gangster moll, makes Gene weak in the knees, in a Technicolor dance fantasy. Fantastic.

For the Singin’ in the Rain 60th Anniversary Ultimate Collector’s Edition, Warner Brothers has gone all-out with a deluxe Blu-Ray box set. In the collection, you’ll find a full-color hardback book with great photos of and about the film. The film is presented in 4K, which is literally top of the line as far as quality (at this moment at least), and it looks fantastic. Additionally, there are two discs full of extras, including a new hour-long documentary called “Singin’ in the Rain: Raining on a New Generation”, which features interviews with current dancers and choreographers (Paula Abdul!), as well as modern directors, chatting about how the film has influenced them. There are commentaries from almost all the major players, including Reynolds, O’Connor, and Charisse (alas, Gene passed away before folks were forced to sit down and rewatch their old films and chat about them scene by scene). There is also the full-length doc “Musicals Great Musicals” about MGM’s musical heyday, a jukebox feature that let’s you flip through song after song, “making of” featurettes, outtakes, a trailer, and much more. But the funniest extra in this super-cool box set? An actual umbrella! HA! I love it!

PreviousSIFF 2012: Golden Space Needle Awards and other winnersNextSnow White and the Huntsman 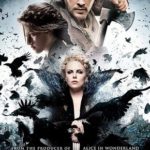