Vivienne was interesting and useful, but now she’s dead, and for now, Alex will just have to do all the things she used to do.
By Ericon December 27, 2014
0 Comments
Our Rating 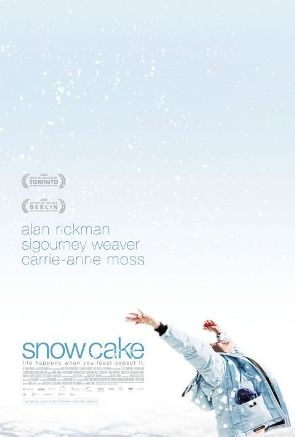 Snow Cake must have had my name written all over it, because I circled it in the SIFF guide more than once over the course of the festival, and only missed out because I couldn’t find a movie buddy. The other day, my friend came up to me with the DVD, saying, “Oh my God, have you seen this? It’s so you!” I took it home that night, and indeed, Snow Cake is totally me. It’s quirky and funny and terribly sad, but most importantly, it’s unlike anything you’ve ever seen before. Oh, and Alan Rickman’s hot.

The movie begins with a chance meeting between Alex Hughes (Rickman) and Vivienne Freeman (Emily Hampshire) at a rather dodgy truckstop diner. Vivienne settles right in at Alex’s table, but he’s not so sure about this chatty young girl. He likes to keep to himself, and he’s sure as heck not interested in giving her a ride to wherever she’s going. He disentangles himself politely but firmly, but has a change of heart when he sees her standing by the side of the road. She could get into all manner of trouble if the wrong person were to pick her up, and so, he lets her in.

Vivienne couldn’t be happier, and proceeds to talk Alex’s ear off, sing along with the radio, and marvel at an excellent purchase—a bag full of balls that light up and play music when you whack them. She just knows her mother will love them. Alex slowly begins to warm up to her charm, and then, in a flash, it’s all over. A semi truck plows into the side of his SUV, killing Vivienne on the spot.

Riddled with guilt but physically unharmed, Alex steals the bag of light-up balls from the police station, sneaks a peak at Vivienne’s mother’s address, and sets out to pay his respects. He knows it will be difficult to meet her face to face, but he’s completely unprepared for what he finds. Linda Freeman (Sigourney Weaver) is autistic, and he’s far more broken up about Vivienne’s death than she is. In a completely matter-of-fact tone, she explains that Vivienne was interesting and useful, but now she’s dead, and for now, Alex will just have to do all the things she used to do.

Bewildered, Alex winds up staying the night, and the next thing he knows, he’s been roped into staying until Tuesday—after the funeral, and after he takes the garbage to the curb for pick up. One minute he’s choosing music for the memorial (or some similarly serious task), the next, Linda is demanding that he bounce her on the trampoline, help her to make a snow beast, or play crazy comic book Scrabble. The random emotional leaps leave Alex absolutely gobsmacked, but he does his best to take care of Linda and pull himself back together again.

Alex finds some some degree of comfort and sanity in the arms of Linda’s flirty and forward neighbor (Carrie-Anne Moss), but quickly learns that she’s not interested in more than a fling. He may not be able to stay in this oddly soothing little world, but the process of opening up to these two women heals some of the profound hurt in Alex’s past. There’s a reason he feels the need to make things right for Linda, and in the end, he takes a huge step toward making things right for himself. It’s a rare treat to find a script that matches the talents of acting heavyweights like Alan Rickman and Sigourney Weaver, and Snow Cake more than rises to the occasion.