I will openly admit that I love animated films, and I especially love animated films that feature cute lead characters. So, it wasn’t overly surprising that all it really took for me to get excited about – and subsequently really enjoy – this animated avian-espionage comedy was one glimpse of the pigeon version of Lance Sterling (voiced by Will Smith). A-DOR-A-BLE!
By Vickieon December 23, 2019
0 Comments
Our Rating 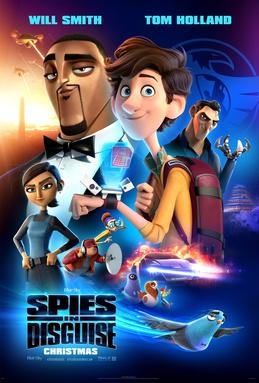 To backtrack: Lance is considered the world’s greatest spy. He can extricate himself from any situation with skill, finesse and borderline-superhuman athleticism, and he’s revered by his colleagues at the C.I.A. At the other end of the spectrum is Walter Beckett (voiced by Spider-Man’s Tom Holland), a sweet and brilliant – if geeky – young scientist and inventor, who works in the agency’s gadget division, crafting clever gear to neutralize the enemy. Thing is, Walter is all about kinder, gentler tactics – he doesn’t want to hurt anyone, and believes all missions can be accomplished without violence. (His prize invention is a glitter bomb that showers its victims in sparkly serotonin-boosting kitten videos.) His inventions are dismissed by just about everyone, including Sterling.

But when a nefarious ne’er-do-well named Killian (voiced by Ben Mendelsohn) steals a top-secret list of agents and frames Sterling for the crime, the elite superspy taps Walter for what he believes is an invisibility serum. Instead, the serum turns Sterling into a (hilariously annoyed) pigeon which, Walter explains, makes him virtually “invisible” to the world. Soon, the mismatched duo are embarking on a global adventure to thwart the bad guy, recover the stolen list and develop an antidote to return Sterling to his human self.

Peppered with plenty of fun pigeon facts (they can fly at up to 92 mph!) and uncanny pigeon-tastic rendering in terms of movement and behavior (again, so cute!), Spies in Disguise is a fun, feathery outing based on the short Pigeon: Impossible, taking that film’s premise and upping the ante. Walter and Sterling are joined by a trio of equally adorable pigeon pals: Walter’s pet pigeon Lovey; a rotund pigeon named Jeff; and a freaky-looking pigeon named Crazy Eyes, who has a surprisingly handy penchant for finding and consuming the most disgusting garbage on the planet… then vomiting it back up moments later. (Honestly, I’d watch a movie starring these three sidekicks all on their own!)

Though not quite as narratively brilliant and sharp as a standard-issue Pixar offering, Spies boasts a brisk pace and eye-popping visuals, all accompanied by a pretty sweet soundtrack (overseen by Mark Ronson). It’s got plenty of big laughs, impressive supporting players (including Rashida Jones as an Internal Affairs officer, and Reba McEntire as Sterling’s Helen-Mirren-doppelgänger boss) and an unexpectedly heartwarming message about brains overcoming brawn might when it comes to battling baddies. It’s a film that’s smart enough for parents to enjoy and silly enough that kids will love it, too, and will no doubt make for ideal family viewing over the holidays. 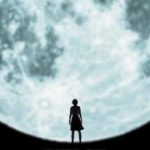 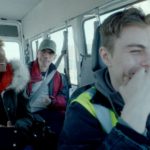