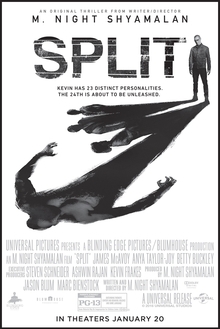 That was my reaction when the closing credits began to roll on what so many people touted as writer-director M. Night Shyamalan’s return to form after a string of cinematic duds – an admittedly atmospheric but endlessly confusing and largely pointless thriller that was basically devoid of an ending.

If you’ve seen the trailers you already know the bare-bones premise: James McAvoy plays a man named Kevin, who has dissociative identity disorder (aka: multiple personalities), and who kidnaps a teenager named Casey (Anya Taylor-Joy) and her two classmates (Haley Lu Richardson and Jessica Sula). Why? Because a few of his personalities have decided they need the girls as food for a creature they ominously refer to as “the beast.”

What unfolds is a dark, dank, claustrophobic tale, as the imprisoned young women – led by a determined if somewhat emotionally flat Casey – try to escape their captor, who frequently morphs from one person to the next right before their eyes.

Though the trailers, and Kevin’s maternal psychiatrist (Betty Buckley), repeatedly point out that Kevin has 23 personalities, only four are ever really a significant part of the film: Dennis, a stern, violent thug with OCD; Patricia, an English grand dame who likes rules; Hedwig, a precocious nine-year-old; and Barry, a genteel fashion designer. The other 19 personalities never really make much of an appearance, so anyone looking forward to watching 23 different James McAvoys will be sorely disappointed (as I was).

That said, if there’s a reason to see this clunky movie, it’s McAvoy, who’s by far the best thing about it. He slips between characters with subtlety and ease, and often it only takes a sideways glance or a raised eyebrow or a suddenly steely glare for the audience to instantly realize, “Oh… uh oh… now he’s someone different.”

Unfortunately, everything else around him falls short. Taylor-Joy remains a clichéd character (the brooding high-school loner whom her classmates consider a weirdo) who’s never really engaging or sympathetic, and her two pals are complete throwaways – why bother having Kevin kidnap three of them when one would have sufficed? The other two really serve no purpose in the story.

And that story is a whole lot of style with little substance. Flashbacks hinting at Casey’s troubled childhood are distracting, the tension that’s ratcheted up is ultimately diffused in a whimper, and the whole thing just kind of ends with a fizzle instead of a bang.

Shyamalan has become known for throwing in wild twists as his films conclude, so viewers like me will no doubt try to crack the film’s secret with each passing scene. But let me save you some suffering: there is no secret. There’s no twist ending to Split. Over the course of the film’s two-hour running time, I came up with what I thought were two pretty cool possible twists… only to see neither of them materialize. Instead, despite all the characters’ sturm und drang, Split just winds up more of a splat.