My cat is pretty open-minded about films, but I think the relentless editing and psycho-sexual-technological imagery tried her patience.
By Lindaon May 1, 2013
0 Comments
Our Rating 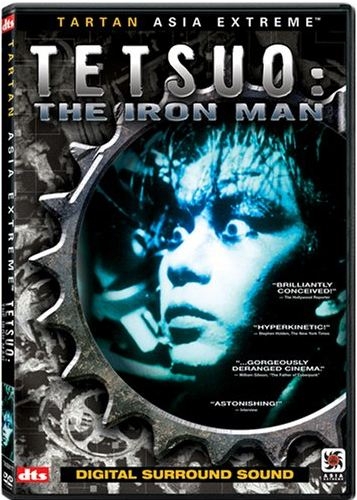 About a dozen years ago, while toiling away as a barista as my first post-college job, I would pass the time chatting about movies with my espresso cart co-workers and our customers. One co-worker, lets call her Cathy (because that was her name), started to recommend films to me. I could hear the challenge in her voice, and her smile strangely seemed to be more of a smirk. Always ready to discover new films, I started renting her recommendations. First I watched Poison by Todd Haynes (who went on, ironically, to direct one of my favorite films of the last few years, Far From Heaven). The film included scenes like a boy flying out a window, and a prison rape/”love” scene against a concrete wall. Hmmm. Then, per Cathy’s suggestion, I rented Lars Von Trier’s Zentropa, which, frankly, made me feel like sticking pins in my eyes. Oddly Von Trier went on to direct Dancer in the Dark, another one of my faves. Of course I did not see this pattern until now, so at the time, when Cathy smirked and told me to rent Tetsuo: The Iron Man, I put my foot down and refused. So it is a dozen years later now. Cathy, wherever you are, this one is for you!

I’ll start by saying that my cat left the room while I watched Tetsuo. That should say a lot. My cat is pretty open-minded about films, but I think the relentless editing and psycho-sexual-technological imagery tried her patience.

To explain the rough plot, a metal-fetishist (played by director Shinya Tsukamoto), who spends the opening scene slitting open his thigh and shoving a foot-long pipe into his leg, gets run down by a car. The man who drove the car (Tomorowo Taguchi) goes home, notices a piece of metal sticking out of his face while he is shaving, picks at it, and blood explodes out of his face. That’s just the beginning. Eventually industrial tubes and wires and metal parts start popping out of his body and overtaking him. A monstrous drill-bit penis explodes out of his groin, whirring impressively enough to drill an arm-sized hole through a wall, or a person perhaps. He screams and is in a lot of pain. Eventually the metal-fetishist from the opening scene, who has been writhing around in some industrial womb this whole time, tracks down the iron man seeking revenge. Or something. Or maybe he wants to make out with him. They have a showdown, and eventually merge together into some monstrous technological monolith, which is, unsurprisingly, penis-shaped, and they race jet-propelled down the streets of modern Japan seeking to take over the world with their love.

At least that’s what I got out of it.

As baffling and frankly unwatchable as the majority of Tetsuo: The Iron Man is, I’m sure that the imagery will stick in my head for a long time. There is excessive imagination in every shot, as appalling and/or gross as the scenes are. The movie was filmed in high-contrast 16-mm black-and-white for budgetary reasons, but that ended up working to the film’s advantage, giving it an arty, industrial look. There is cool, metal-clanging soundtrack, and transformations are achieved with stop-motion animation, wriggling wires, guts exploding and all. It is excessively violent and gross, and I’ll admit, even funny. After our main guy has had half of his body turned into a jumble of wires and pipes, his girlfriend has decided enough is enough and digs a knife into his neck (while he still has a fork hanging off his cheek). But this ends up turning her on, and she starts licking his face while twisting the knife deeper into him. But, hey, lady! Remember to watch out for that drill-bit penis!

Tetsuo: The Iron Man is considered a cult classic in the psycho-sexual-horror movie genre (find THAT section at Blockbuster!). In the same breath, fans often name-drop David Cronenberg, David Lynch’s Eraserhead, and even Kafka’s Metamorphosis. If you like work by those artists, I’ll bet you’ll get a kick out of the twisted horror that is Tetsuo. For the rest of us, i.e. those of the faint of heart or stomach, or those with a low tolerance for arty and surreal assaults on the senses, I give you permission to skip Tetsuo, guilt-free.