As shown in the breezily complex and frustrating The Big Short, the rampant greed of banks led directly to the housing market and Wall Street collapse of 2008, dominoing into a worldwide recession. People lost their homes, people lost their jobs, and, as pointed out by Brad Pitt’s ex-banker character, people lost their lives.
By Lindaon July 12, 2016
0 Comments
Our Rating 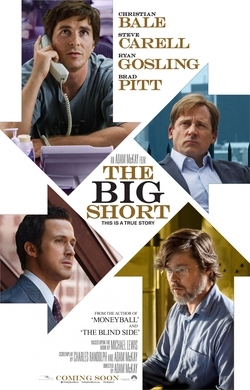 A lot of white guys in nice suits lost their riches in the financial collapse of 2008, and a few white guys in suits (and one notable one in bare feet) profited off the bust. It all stemmed from said bare-footed San Jose doctor/number-cruncher Michael Burry (Christian Bale) predicting the pattern that would end up literally breaking the bank(s). Sub-prime housing loans bundled together with other crappy loans were thrown on the market under the guise of being solid loans (or… something), leading directly to a full-on shit-show on Wall Street. Burry bet against these supposed “rock solid” loans, betting against the banks–and the bankers, being smug bastards, totally take him up on it.

That is my best shot at explaining it. Director Adam McKay KNOWS that you won’t really understand it, so The Big Short is littered with rapid-fire-edit montages of pop-culture, characters breaking the fourth wall to address the audience, and random celebs (Anthony Bourdain, Selena Gomez, etc.) explaining to the camera with fish (Bourdain) and chips (Gomez in a casino), what the heck is going on. A handful of others (including Ryan Gosling, Steve Carrell, and Brad Pitt) get wind of Burry’s prediction, run their own numbers, and risk jumping into the game, betting millions and millions, that billions and billions will collapse.

Steve Carrell’s Mark Baum is meant to serve as a sort of conscience for the story. At the same time he is one of the folks that risked big bucks, betting on a Wall Street collapse. So while he is asking questions for the audience (how much DOES a stripper make, that she can own five houses AND a condo?), and wringing his hands while the apocalypse nears, you can’t keep from your mind that if the apocalypse DOES happen (and we all know it will), he will become filthy rich. Actual victims of the crisis are just a blip in this movie, mainly represented by a man and his family that go from being good rental tenants to living out of a car. Ben Rickert (Brad Pitt), and ex-trader, is the only one offering any true gravitas and seeming regret about what is happening, but he, too, is playing his own bets on the collapse, and, in turn, benefitting as well.

The Big Short is entertaining, frustrating, a bit confusing, and often distractingly annoying (bad wigs, over-editing, ill-developed backstory of a suicide to offer moral depth). The film does succeed at pissing you off, one way or another, and the postscript unsurprisingly leaving you with a bitter taste in your mouth afterwards.