If that tiny Coast Guard rescue boat wasn’t so laden with cheese and corn, they might’ve been able to rescue TWO tankers of sailors!
By Lindaon July 12, 2016
0 Comments
Our Rating 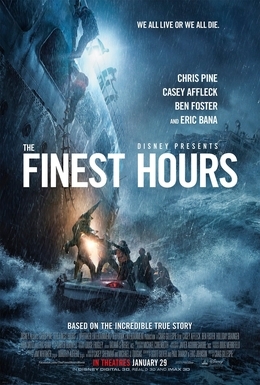 I hate getting annoyed with movies that have such good intentions. It’s not like there isn’t a great story behind The Finest Hours, because indeed there is. In 1952, a wicked winter storm off Cape Cod snapped a huge tanker in half, leaving the stunned crew trying to keep their half of the ship afloat in 30+ foot waves, hoping for rescue. When a comparably tiny Coast Guard boat with a crew of four is sent to rescue the desperate men, the whole venture seems literally impossible.

But since this is Disney, the story drives home the aw-shucks, good old-fashioned heroism and tradition with the subtlety of a booming soundtrack that tells us exactly how we should be feeling. (Note to Disney: You know that one point where the soundtrack stops, leaving silence except for the dripping of water? That was effective… I’m just saying.)

Chris Pine seems a little old to be playing Bernie Webber, a youthfully awkward Coast Guardsman who is sent on what is seen as an impossible suicide mission. He and his small crew of men head straight into the cold darkness of swirling snow and swelling waves toward a distress sound: the distantly braying horn of a tanker that has split in two. Despite the danger, it’s their job. There is little hesitation. Meanwhile, we see the crew, with reluctant leader Casey Affleck, trying to keep the half-tanker afloat, hoping… just hoping that someone might be coming to save them.

It is a straightforward plot, and has several effective scenes. After the ship cracks, one man on the tanker walks a catwalk to see why the captain hasn’t answered the radio calls from below deck, only to find that the catwalk simply ends… dangling over the open sea. In another scene, the Coast Guard boat approaches the dreaded “bar”, an area of ever-changing current and chaos in the ocean that will most likely destroy their boat with its violence. It is dark, so they can’t see. But they, and the audience hear the deep crashing boom of unfathomably large waves crashing in the distance, getting closer as they approach blindly. Truly scary.

Glimpses of moments like these are what make the rest of the film distractingly frustrating. Characters aren’t developed, ending up being identifiable just by a token identifier: the loner, the cook, the black kid, the sick buddy. The look of the town and sea is awesomely snowy and frigid, yet no one seems to acknowledge the extreme chill (I was ready to let go of the fact that you couldn’t see anyone’s breath… except that the filmmakers abruptly added puffs of exhalation to the final scene). There is also a completely unnecessary, corny frame of a love story for Bernie, which just screams the intention of having him kiss a girl at the end. And finally, maybe it was just me, but Bernie sure looked like he used The Force at one point to navigate through the waves (I almost has to stifle giggles).

Yes, this incredible true tale is astonishing and heroic. But The Finest Hours unfortunately drowns the story rather than developing it.