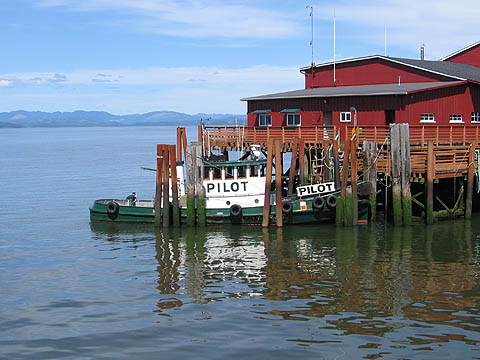 As loyal Moviepie readers know, The Goonies is flat out my all time favorite movie. I have endless happy memories of watching it throughout the years, and it’s one of the few things from childhood that has remained relevant no matter how old I get. I could go on and on about why I love it, but one major reason is that it feels so much like home. It has a distinct Pacific Northwest sensibility, and I’ve always wanted to take a little Goonie field trip to Astoria, Oregon to see the town. I’ve never been able to wrangle anyone into going (despite throwing, “We could always go to Astoria!” into many random conversations), until last weekend, when I managed to rope Linda Moviepie into attending two days of the 25th Anniversary Celebration. 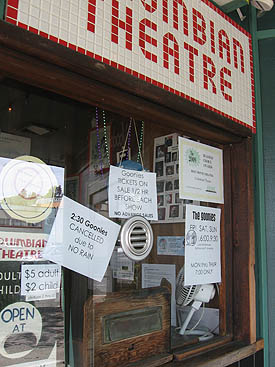 We made the 3 1/2 hour drive down from Seattle on Saturday morning, arriving in the Goondocks around 1:00. Miraculously, it was the one warm and sunny day after a long string of rainy grey days, and indeed the 2:30 showing of Goonies at the Columbian Theater was cancelled due to “NO RAIN”, something that would probably only make sense in the Northwest, where sunshine is such a rare commodity that we need to cancel plans in order to go out and enjoy it. On their orders, we spent the afternoon exploring the town and paying a visit to the new Oregon Film Museum, which had opened that morning. Housed in the historic Clatsop County Jail (of Fratelli jail break fame), this teeny tiny museum includes the jail cells seen in the movie as well as various props from the film including the Walsh family mailbox, the ill-fated David statue, Data’s costume, Chester Copperpot’s library card, etc. There are also nods to other well known Oregon films, but nothing as comprehensive as the Goonies display. Parked out front? The Fratelli’s ORV! Honestly, I think I was as excited to see the jail and the Jeep as I was to see any of the cast members. Just across the street is the historic mansion Flavel House, which served as the museum where Mikey’s father worked in The Goonies. 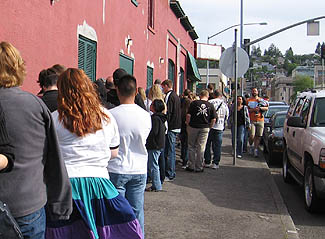 After a brief break for a cup of coffee at The Rusty Cup (where we heard Joey Pants had been sipping a cuppa earlier that day), we headed down to the 6:00 showing of The Goonies. Fans in Goonies shirts were lined all around the building, and for a sinking moment I worried that we wouldn’t be able to get a ticket. It didn’t help that the lady in the ticket booth closed the window and stepped away for a moment just when it was my turn, and it’s entirely possible that my heart stopped for a second or two. She cheerfully returned, however, and I found myself watching The Goonies for the first time in a theater in the town where it takes place. I’ll admit that I got a little teary at several points, and I wouldn’t be surprised if a few other fans did too. People were clapping, cheering, and taking pictures of the screen, obviously reveling in a moment that truly delighted their inner child. 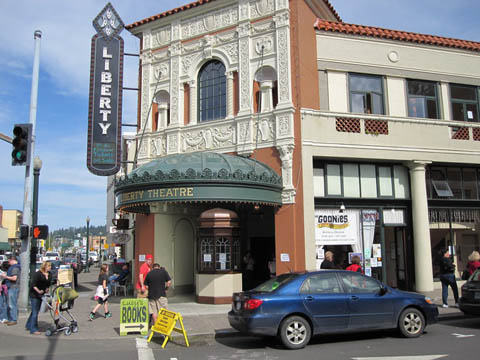 After the movie, we spent some quality time alone with the jail, snapping pictures while no one else was around. We then headed down to Seaside to rest up for our big Meet and Greet in the morning. Unfortunately, two very key players in this event apparently did not rest up for the big day. Sunday morning was drizzly and grey, but we managed to avoid getting drenched in line by snacking at The Rusty Cup until the Liberty Theater opened its doors. As soon as I saw the stage, set with a table and six chairs, I was filled with hope. I was just sure it meant that Richard Donner and Sean Astin (announced at the last minute for the 3:00 Meet and Greet) were going to join Corey Feldman, Jeff Cohen, Joe Pantoliano, and Curt Hanson for our session as well. Or, you know, it could always mean that NO ONE is coming.

The announcement came while we were in the restroom, but we soon learned that only Curt Hanson had shown up. Joey Pants was still a possibility, but Jeff and Corey simply weren’t coming. Event staff basically shrugged, “There’s no excuse, really. We know they’re in town.” And at that moment, I’m sure one word flashed through the minds of every single person in that theater: hangover. Not only was it a huge disappointment to come all that way for a let down, it sort of flew in the face of everything it means to be a Goonie. Linda and I may have traveled 180 miles, but fans came in from all around the world. 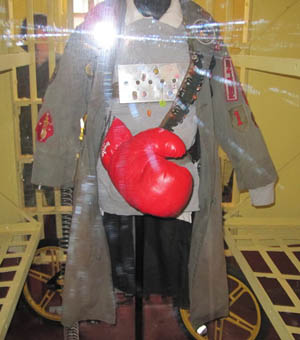 I must say that the Chamber of Commerce was incredibly gracious in offering both their apologies and refunds to the audience. Their kindness made up for the strange absence of most of our guests of honor, as did the wonderful Curt Hanson, who single-handedly entertained us with stories from the film before posing for pictures and autographs with fans. You’ll remember him as the fabulously snide Mr. Perkins, father of Troy Perkins, and the richest man in Astoria. One fan cheekily asked, “Why was Troy such a cheap guy?” and he gamely replied, “It’s how his father raised him!” He even answered my question about the last scene in the film, where they tear up the foreclosure papers, and Mouth randomly grabs a pen and writes down the front of his overcoat. I only noticed this little detail in the last few years, and was curious as to whether it was scripted or improvised. Indeed it was in the script, and it took two jackets and a passel of ballpoint pens to create the moment. It seems they were never able to get the ink to show up on camera before they began losing light and had to move on. Interesting! 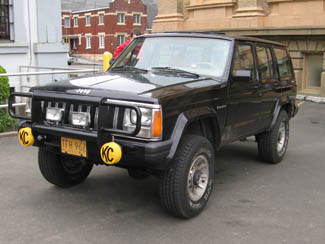 Meanwhile, as we waited for our turn with Curt, Joey Pants a.k.a. Francis Fratelli showed up! He set himself up onstage and a second line for meeting and greeting formed. AND THEN, just as it was our turn, we were told that Joey kinda wanted a break and wouldn’t take any more people. Seriously?! I offered to turn on the tears, and I think someone else uttered the word “asshole”, and soon the line was moving again. I had brought along a promotional dog tag from the video release of the movie Bound that I’ve had since my days as a video store clerk, long before I ever even saw the movie. He graciously signed it and posed for pictures, and was, unsurprisingly, his awesomely funny Joey self. All in all, the “disappointing” Meet and Greet turned out well, and given the fact that I’d be willing to visit this lovely little city any day of the week, I’ll consider any celebrity encounters gravy. 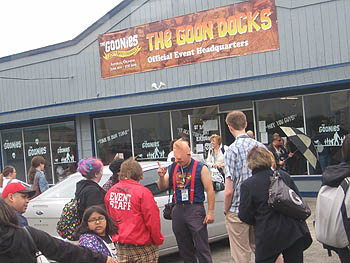 After lunching at the farmer’s market, we headed to event headquarters a.k.a. The Goondocks for our bus tour. Fittingly, there was some difficulty in locating a guide for our tour (we were apparently the jinxed Goonie group), but someone finally came to our rescue and our rock star bus driver got things rolling. The tour included Mikey’s house (we were allowed inside!), the football field (where bus #7 from Kindergarten Cop is also parked), Mouth’s house (now owned by a warm, welcoming family who actually had the clip from the movie looping on their TV so we could see the kitchen in the movie and then in real life), and finally the totally 80s bowling alley (where Chunk first sees the car chase).

The kindness shown to the fans throughout the event was truly remarkable, and our genuine love for the movie was always shown the utmost respect. As Curt Hanson said, “I don’t get it, but I love it!” Indeed, Goonie love may be hard for some to understand, but just about anyone can appreciate its sincerity. For any of its warts, my Anniversary weekend was truly a dream come true, and I can only hope that it’s a tradition that will continue in the coming years…perhaps with Jeff and Corey actually showing up at my event. Boys, if you’re out there, I’m still waiting for my autographs!