The Lifestyle: Swinging in America

“Aaahh! My eyes are burning!!!” I shrieked as the film treated us to lots of elder people in all shapes and sizes gettin’ busy…
By Lindaon December 27, 2014
2 Comments
Our Rating 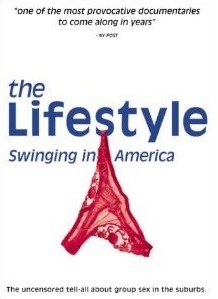 There was this episode of the very funny Fox TV cartoon “King of the Hill”, where middle-aged Hank Hill walks in on his elderly mother having sex with her new boyfriend on the kitchen table. Scrambling to flee the scene, he goes blind (as a defense mechanism?) until he admits to a therapist what it was he saw that disturbed him so. That is basically the response that most viewers (except really really unshockable people) will get from watching the documentary The Lifestyle.

“The lifestyle” refers to the life of “swinging,” or couples swapping sex partners. According to this candid, funny, and yes, graphic documentary, there are some 3 million active swingers in the United States, with at least one swingers club in every state except North Dakota (huh!). “Sport fucking” and “sexual recreation” is what one interviewee calls “the pastime,” as he takes viewers on a tour of his house that is set up for swinging parties (9 beds, a couple of creatively-shaped chairs, a swing hanging from the ceiling, a hot tub on the deck, two bathrooms [“very important!”], and group rooms, where pretty much the whole floor is covered in foam padding).

Now, this sounds kinda interesting thus far in print, but let me back up a second. It is only fair to mention that almost everyone in the film (and typical of “the lifestyle”) is 50-plus years old. These swingers are parents and grandparents. The only young couple interviewed expressed a little surprise (and dismay) after attending their first party that everyone was “our parents’ age”. Ewww. One couple points out that the lifestyle is usually only good for committed couples that have been together for “double-digits”. This is proven when we see the young couple almost destroyed by jealously and unspoken disagreements after a year.

Though the first part of the film deals mostly with the dynamics and rules of swingers parties, and takes us to a lifestyle convention in Vegas (I swear!), in the second part we are taken to an actual swinger party. Warning: this is the part of the film that threatens the mental implosion of the viewers. “Aaahh! My eyes are burning!!!” I shrieked as the film treated us to lots of elder people in all shapes and sized gettin’ busy, amusingly (and un-sexily) interspersed with people the kitchen cheerily helping themselves to an all-American potluck.

Now, if you don’t mind, I have to take a couple aspirin and lie down for a spell.