“He threw the living crumpet!”
By Jenniferon August 15, 2013
0 Comments
Our Rating 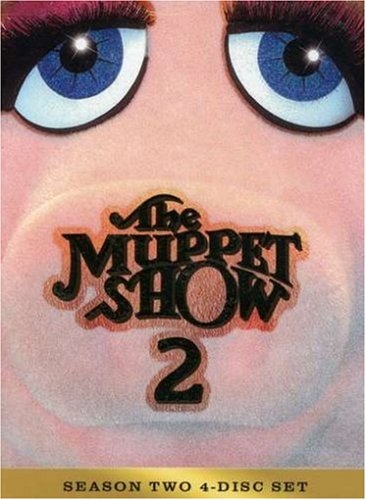 Sometimes when I watch the Muppets, I can hardly believe they were on TV. Every week. For years. This childhood staple would be so out of place in today’s TV landscape, yet it remains just as weirdly funny as it was when it first aired. If you loved The Muppet Show when you were a kid, chances are you’ll relish in hearing the theme song and catching up with all your old friends in the Season 2 DVD.

Admittedly, there are times when a little bit of The Muppet Show can go a long way. There is far more singing than I remembered, Miss Piggy can really grate on a girl’s nerves, and some of the humor is pretty trippy—like maybe it would be better if one were, say, smoking something. Even so, I found myself delighting in the opening of each show, practically tearing up at the words “it’s time to light the lights”, and waiting with the anticipation of a 5-year-old to see what would fly out of Gonzo’s horn at the end of the song.

Sure there’s plenty of silly business to put up with, but what made the Muppets unique was the weird blend of kid-friendly characters and adult humor. There was always some sort of backstage drama going on, a love triangle or two, and the hosts would interact seamlessly with these fuzzy little creatures. They were all so lifelike that we accepted them as stars. Why shouldn’t Kermit the Frog be rubbing shoulders with Elton John and Julie Andrews? This is Hollywood, after all.

Season 2’s guest list includes all the heavyweights of 70’s comedy including Bob Hope, Steve Martin, Don Knotts, George Burns, John Cleese, Madeline Kahn, Peter Sellers, and (my personal favorite) Dom DeLuise! It truly serves as a time capsule for the era, though today’s kids may be left scratching their heads at times. It’ll come as no surprise if they have no idea who Bernadette Peters is, but in the late 70’s, The Muppet Show kept us savvy. Sometimes I’ll wonder how the heck I knew someone when I was a kid, and the answer is invariably The Muppet Show.

As I made my way through the six-disc set, I’ll admit I rolled my eyes from time to time. There is a fair share of fluff that doesn’t necessarily hold up, but when I got to the 1974 Valentine Special the whole collection was redeemed. It finds a very pregnant Mia Farrow visiting the Muppets from England. She brings with her a bag of crumpets, but one mopey Muppet whines, “We had a crumpet, but it died.” They sit down to tea, and someone lifts the cover off a serving dish. “What is that?” they wonder, staring down at a blinking brown blob.

“It’s the crumpet!” exclaims the Gloomy Gus, “The crumpet lived!”

Another Muppet slings the crumpet across the room, and the mopey one cries, “He threw the living crumpet!”

I dare you to find a scene that hilarious and surreal on another show. For better or worse, Jim Henson had a good thing going, and we’re lucky to relive it all on DVD.