“Do it again, and you’ll be admiring my butt… from the pavement… with a straw!”
By Jenniferon October 12, 2013
0 Comments
Our Rating 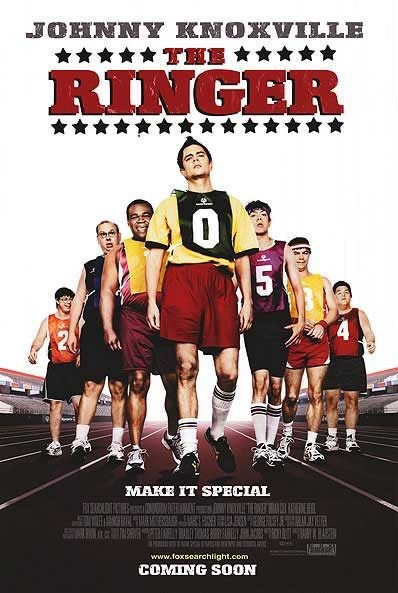 The premise of The Ringer is so politically incorrect that you feel like laughing at it could easily buy you a one-way ticket to hell: go directly to hell, do not pass GO, do not collect $200, and please take a seat next to Johnny Knoxville. Well, I’m pleased to report that I laughed ’til I had tears streaming down my face, and by the time the movie was over, I was no longer fearing eternal damnation. It’s actually surprisingly sweet.

Johnny Knoxville stars as Steve Barker, a lovable failure just trying to get ahead in life. He finally works up the nerve to ask for a promotion, but when his new job requires him to fire Stavi, the dedicated janitor, Steve can’t go through with it. Instead, he hires him to do yardwork for a higher hourly wage and with full medical benefits. Unfortunately, Stavi’s not too handy with the lawnmower, and he winds up losing three of his fingers. Who knew a little white lie about health insurance could come back to bite a person so quickly?!

Riddled with guilt, Steve knows it’s up to him to raise the money for the reattachment operation. In desperation, he calls his sleazy Uncle Gary (Brian Cox), who comes up with the brilliant idea for Steve to throw the Special Olympics. All he has to do is pretend to be retarded, beat the reigning champion, and they’ll make a fortune in wagers! Naturally Steve is appalled, but what choice does he have? Stavi’s fingers can’t stay on ice forever.

Gary becomes Steve’s coach, and together they watch training films like Rain Man and Forrest Gump. He advises him to channel “that monster ‘tard from The Green Mile“, and is surprised by Steve’s disapproving reaction: “What?!” he says, “Since when is ‘tard’ politically incorrect?” Brian Cox is hilarious as the amoral, cigar-sucking Gary—talk about a jackass!

After much preparation, Steve arrives at the Special Olympics camp as Jeffy Dahmor. He immediately takes a shine to his lovely counselor, Lynn (Katherine Heigl), but runs into trouble with his new roommate. Steve not only looks at one of his CDs “in clear daylight”, he accidentally drops it on the floor and scratches it. A tantrum ensues, and the other athletes come running. Steve tries to save himself with, “I was just admiring his CD,” but one of the tougher athletes steps forward and says, “Do it again, and you’ll be admiring my butt… from the pavement… with a straw!” And that is officially my new favorite movie line.

Though Steve wishes he could reveal his true identity to Lynn, it’s the athletes who see right through him. They know he’s a faker, but they sympathize with his situation, and rally behind him for Stavi’s sake. They see that there is no malice in Steve’s plan, and somehow this makes his bizarre scheme forgivable. For the first time in his life, Steve has the support of friends who genuinely want the best for him. In this vein, The Ringer becomes a celebration of abilities, and proves that sincerity and determination don’t always go unrewarded. Uncle Gary may face time in purgatory, but the rest of us are free to enjoy this goofy, heart-warming movie without making a deal with the devil.