Take at least three feature-length sci-fi films, blend in a mixer, and pour the goo into a pan. Set the oven to make sure it is half-baked, and you have The Tomorrow War. 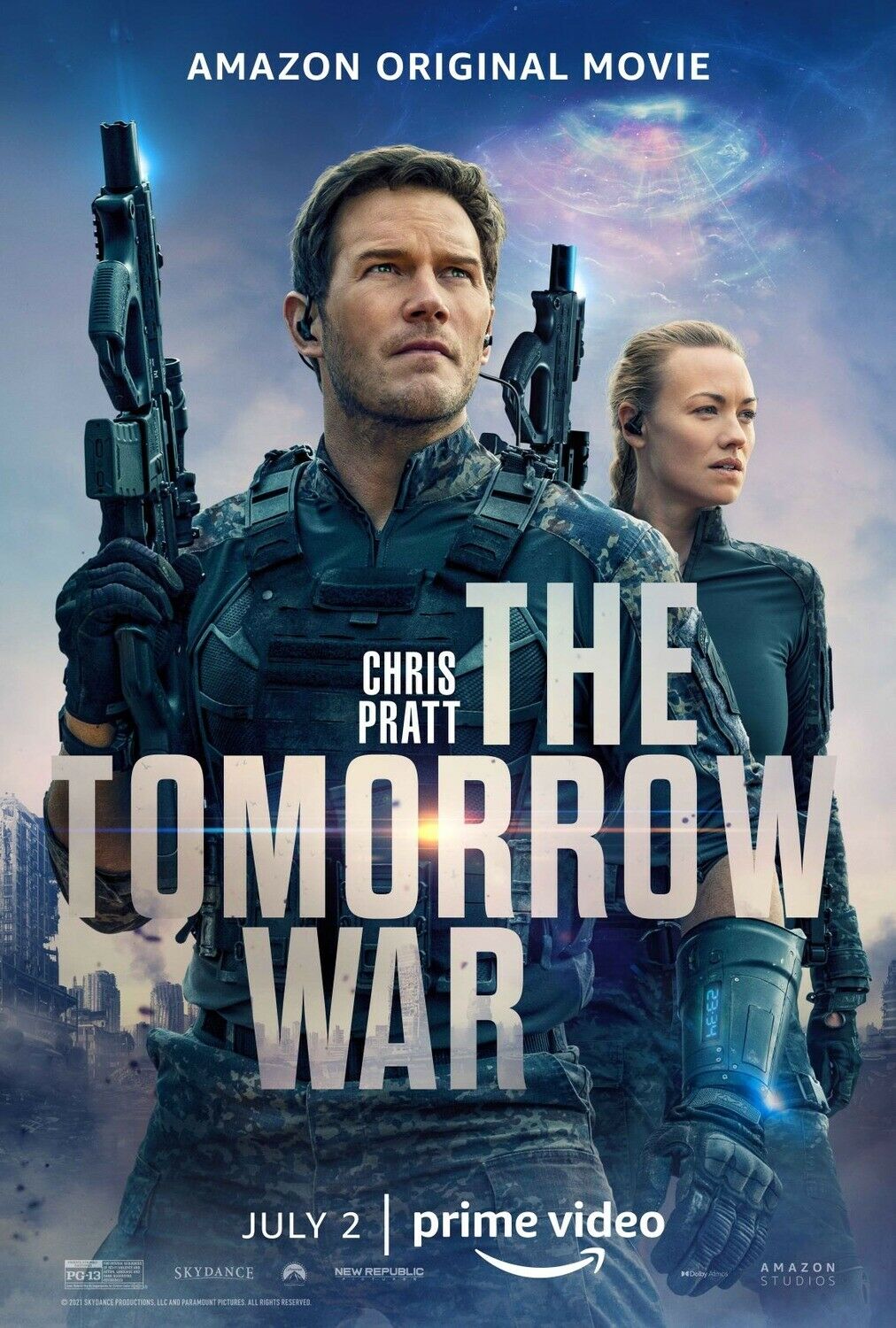 After the first major sequence of The Tomorrow War, I looked at my viewing pal and said, “Wait, is the movie over? Did all of that just happen in 20 minutes?”

We had just seen present-day Chris Pratt, a disgruntled high school science teacher named Ben, get drafted by future soldiers to help fight to save the Earth. Humanity has been decimated by octopussy aliens who have ravaged all the continents, killing most of humanity. So, along with a whole bunch of everyman-types, Ben is given a gun and no training, gets sucked 30 years into the future, is told to go rescue some researchers (after all, he is ex-military so sort of knows what he is doing), finds that they are all dead (spoiler!) and as a mass of tendrily, toothy aliens proceed to infiltrate the future-Miami building, is told by a voice in his ear piece to “GET OUT OF THERE!!!”

If it seems like that is a whole epic plot in itself, you are right… and the movie is only just starting.  The Tomorrow War is well over two hours and throws in all sorts of elements from familiar sci-fi, time travel, and alien tropes that we’ve seen in Edge of Tomorrow, or Starship Troopers, or Looper, or The X-Files, or Independence Day… or really, all of the above. Like a six-hour series that had to be sliced down to under 2 1/2 hours, it’s like the filmmakers desperately didn’t want to leave out any of their ideas… but at the expense of plot exposition, character development, and really any sense of what the heck.

Maybe Chris Pratt left his best work on the cutting room floor, or maybe (more likely) they didn’t give him anything much to work with. He furrows his brow a lot, responds in awe to green screen sci-fi-ness, and tries his best to emote during pivotal scenes. J.K. Simmons, even though he doesn’t get a lot of screen time, seems to be smirking behind his Santa-beard. He’s probably just relishing that he got an awesome personal trainer out of the film. I’d mention some of the other characters, but they barely register… you know comic relief guy (Sam Richardson, as a nervous scientist) and the quiet, bitter soldier (Edwin Hodge, who is playing the Anthony Mackie role) show up inconsistently to show that He Is Not In This Fight Alone.