The Wild Parrots of Telegraph Hill

Judy Irving’s ode to a flock of birds and the man who loves them is as cozy as a mug of tea and soft slippers on a rainy day (which happens to be how I saw the movie).
By Lindaon December 27, 2014
0 Comments
Our Rating 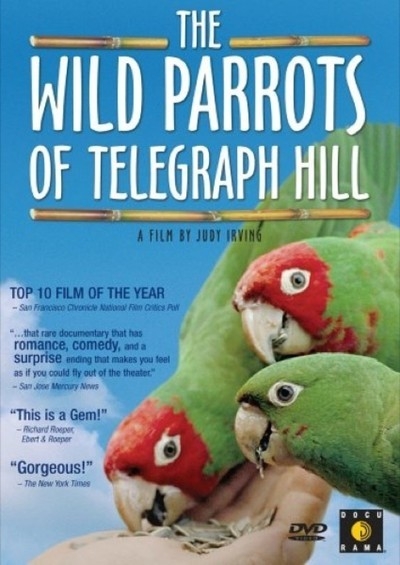 The Wild Parrots of Telegraph Hill is a gentle ode not just to a specific bunch of feathered friends that roam San Francisco, but in a way it is a Valentine to all animal lovers with its focus on the well-spoken parrot fan Mark Bittner.

The film introduces us to Bittner, a musician who moved to San Francisco in the 1970s hippie heyday. He lives rent-free in a cottage on Telegraph Hill, and is one of those people who seems very busy doing nothing. He doesn’t work, he frequents coffee shops, and spends a lot of time feeding and watching an unusual flock of birds who live in his neighborhood. Not just any old flock, these birds are parrots, certainly not native to the area, but as wild as any other neighborhood critter that you’d be lucky enough to coax to your hand to offer a snack.

Bittner serves as narrator to the film, as he shares stories of how he started watching the birds as an amateur bird-sleuth, and began to figure out behavioral patterns as well as know the individual birds by sight. The film cleverly takes us along on his own learning curve, and Bittner is self-depreciating enough to let us know when he was way off on his guesses about what the birds were up to. We learn about these “cherry-heads” as Mark learns, and heck if it isn’t a fun journey! We learn to recognize Connor, the blue-headed cranky outcast. We feel Sophie’s pain when she loses her mate. And we feel for Mark when he is forced from his home and has to give up his domestic bird Mingus.

Bittner is a warm and gifted storyteller. To carry a documentary, the narrator has to be able to hold an audience, and he easily succeeds. You slowly start to realize that the film is not just about birds, and their relationships with each other and their environment, but like all good films, there seems to be a bigger picture. When Mark speaks fondly and sadly of a dying bird whom he was nursing to the end, heck, you’d have to have a stone heart not to cry when he tells about his regret of denying her snuggly companionship on her last night (he thought if the bird was laying next to him in bed, he’d accidentally roll over and crush her).

The Wild Parrots of Telegraph Hill is a wonderful film that should appeal to fans of the slew of excellent nature documentaries like March of the Penguins and Winged Migration. These types of films should be seen by wider audiences because, ironically, they can tell us a surprising amount about human nature and our own role on this big, feathered, furry planet.