“Excuse me… could I have Prince Albert in a can? Thank you!” (scurrying away, clutching The Young Victoria‘s Prince Albert close to my heart…)
By Lindaon September 29, 2013
0 Comments
Our Rating 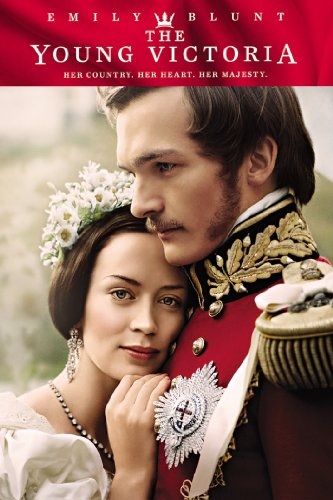 Let me say this up front: Just having watched season three of The Tudors, where Henry VIII continued to brutally butcher not only his countrymen, but his own advisors left and right, The Young Victoria came across to me as Springtime in the British Monarchy. Heck, the threat of being forced to assign a regent because you are too young to rule a country seems positively mild compared to literally putting your neck out for a drunken axe-wielding executioner. But back to The Young Victoria…

Victoria, in real-life, is remembered as a dowdy old woman who wore black in widowhood for decades, posed regally for early photographers, and is celebrated for her still record-breaking six-decade reign as a popular monarch. But The Young Victoria follows her early days, when Victoria (Emily Blunt) became an 18-year-old monarch upon the death of her uncle, the fabulously loopy but sharply aware King William (Jim Broadbent). As his demise was imminent various folks tried to get her to sign over her power while she was underage, including her mother (Miranda Richardson) the Duchess of Kent’s sinister right-hand man Sir John Conroy (Mark Strong). Overprotecting Victoria as the most direct heir to the throne, mom insisted that Victoria hold someone’s hand each and every time she walked up and down the stairs, lest she fall, break her neck, and ruin the family’s potential for power.

But Victoria was a smart girl, and luckily uncle held out until she turned 18th before he expired. As soon as the throne was hers, she kicked out Conroy and her mother as advisors and instead entrusted advice to Lord Melbourne (Paul Bettany), a man who had his own agenda, as all members of the court do. One of the refreshing things about The Young Victoria is you are never quite sure what Melbourne is up to. Is he evil? Is he out to back-stab Victoria? Or is he really looking out for her best interests? Things are more complex than they seem.

When Victoria is introduced to Prince Albert (Rupert Friend), is it obvious that the match is a political one: Albert’s father is the King Leopold of Belgium, after all. But darn it if Albert isn’t absolutely adorable. He’s intelligent, sensitive, obviously admires Victoria, and has no problem that he will never be King if he marries her, but will be the Prince Consort. But Victoria has to learn to trust that Albert is true in his affection, and that he isn’t in it to sneak his own personal power from the arrangement.

So what you have is a true romantic partnership. Sure, Victoria wears the pants in the relationship, so to speak (being Queen and all), but Albert is genuinely interested in helping as a true partner. Simply put, I swooned all over this guy. This Prince Albert is charming, smart, and not afraid to put his life on the line for his woman, and the whole time is perfect content to take his place in her shadow. And let me add: There is a moment in the film where Victoria and Albert take their first dance at a royal ball that is sexier than any sex scene of any movie all year.

The Young Victoria works best as a romance. Perhaps as a reflection of the naïveté of its subject, the more complex political turmoil takes place in the background (as the movie doesn’t have the benefit of being a mini-series, it is probably wise that it doesn’t go into too much detail about the unrest). But despite the vaguely ominous tone, with the youthful, positive couple in the palace, there is a sense of optimism that these kids are out to do good for the common people, and that they won’t be a monarchy of elitists. Interestingly, and probably not by accident, such a tone reflects nicely modern times where our own elitist administration was tossed out with the promise of a more transparent one. We’ll see how that actually plays out! In the meantime, we can take historical fairy-tale romances that ring so resonantly because they were actually true. Ah, swoon!