On occasion at TIFF, if you’re lucky, you’ll see something that defies description. Sometimes, it’s a film that is so breathtakingly fantastic that it seems impossible to find the words to accurately convey to anyone unfortunate enough to have missed it how amazing it is; sometimes, it’s a movie so bizarre and confounding that, likewise, you can’t quite wrap your brain around it… let alone try to explain its complexities to someone who wasn’t sitting in the theater with you.

Then, other – rarer but no less special – times, you’ll find yourself sitting through something so astoundingly terrible that it being programmed at any kind of high-profile film festival seems like it must have been a clerical error somewhere along the submission-process lines. For me, that was the case with Brian De Palma’s Passion… a film so insane and insanely bad that I’m actually giving it two different ratings: as a legitimate thriller (2/8, because it was lame) and as a potential camp classic (7/8, because it was fabulous).

In the film, which the folks at TIFF labeled an “erotic thriller,” Rachel McAdams stars as a glamorous, ruthless executive named Christine. Imagine her Mean Girls character, Regina George, all grown up and working in advertising, and you get the gist of this driven career woman’s personality. Christine’s closest colleague is the decidedly-Anglo-named-despite-being-Swedish creative director Isabelle James (Noomi Rapace), who’s comparatively plain but full of promise and fantastic ideas… so much so that Christine decides to claim one particular campaign proposal as her own. When that pitch earns Christine a heap of praise and a big, fancy promotion, the claws come out and the two women engage in the most ridiculously hilarious game of mutual professional sabotage, and one that slowly crescendos to a bizarre and bloody climax.

I’m not even sure where to begin when it comes to listing the reasons Passion was hysterically wrong on so many levels. Maybe it was the false promise of some McAdams/Rapace girl-on-girl action (hopeful moviegoers take note: there’s almost none). I’m one of the handful of people who really liked De Palma’s Femme Fatale, which had a similar bisexual-bad-girl subplot, but at least in that film Rebecca Romijn actually got it on with her female co-star. Here, despite Christine’s sexual kinks (of which there are many), the kiss featured in the widely distributed press photo (above) is about it for these two. And, in Passion, sex/sexuality is always linked to aggression, anger and control, which makes what little of it there is in the film decidedly meh and disappointing, especially when the old “psychotic lesbian” chestnut is rolled out to push the proceedings further into eye-roll territory. 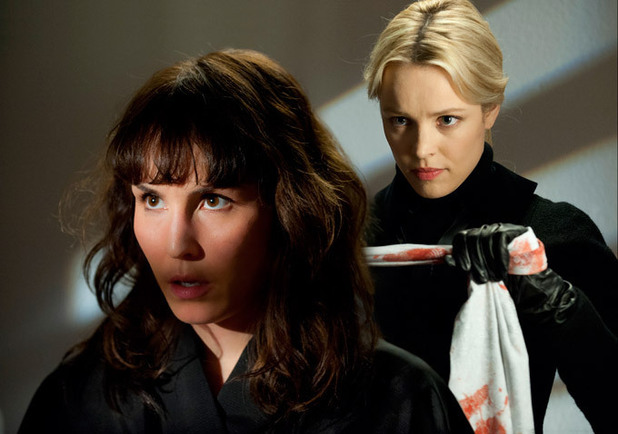 Then there was the casting: what to say about McAdams, whom I love, in this horrifyingly clichéd role? Despite her talents, I didn’t believe her for a second. Or Rapace, best known as ass-kicking Lisbeth Salander, as a shrinking violet who may or may not be mentally unstable? Seriously, the two actresses should have swapped parts. Best of all, perhaps, was Paul Anderson as the apex in a twisted and highly unbelievable love triangle with both (hot) women, despite the fact that his character is a giant asshole who looks like a homeless heroin addict in an expensive suit. The only person who actually delivered was Karoline Herfurth as Isabelle’s devoted assistant, Dani… until, of course, her storyline derailed just like all the others.

Then there’s the actual filmmaking. Right from the bouncy opening-theme music (which was reminiscent of a rompy comedy), something was off. The subsequently über-dramatic score was so over-the-top that I actually giggled. The direction to the actors and the DOP must have been equally bizarre, because much of the film and its performances unspool like a big-budget-but-no-less-cheesy soap opera.

And don’t get me started on the hilarious lighting! Exactly halfway through the film (I know because I checked my watch), it was as though every lightbulb in the world had disappeared, and all light on the planet Earth was being filtered through enormous California shutters. STRIPES! All the light was STRIPES from that point on. (See second photo, above: STRIPES!) Offices where people were actually working were suddenly plunged into darkness… and no one noticed! Hallways, boardrooms, police stations – everything was shot with stripes of light across the set as though screaming at the audience, “AND NOW WE WILL PAY HOMAGE TO NOIR FILMS WITH THIS DRAMATIC LIGHTING EFFECT!” A smidge heavy-handed? Oh, indeed.

There’s very little suspense in Passion, but a huuuuge number of laughs (unintentional, most), and I have no idea how much of the story from the French film on which it was based – Crime d’amour – actually survived the adaptation to English. The original couldn’t have been this silly, could it? Worst (or best?) of all, Passion’s final 30 minutes are so dizzyingly confusing and confounding that, as of this writing, I still have no idea what happened, really, or why. Or who actually did what. Or why. Or whether what I watched was one character’s drug-induced hallucination, a nightmare or the truth.

All that said, as stupendously inane as Passion is, it’s also a lot of campy fun. In order to enjoy it, you really can’t take any of it seriously. At all. And, in fact, going in expecting a pulpy, comedic melodrama (yes, I realize it’s oxymoronic) is probably your safest bet. I fully expect it to travel the same path as Showgirls and to achieve infamy as a movie people gleefully love to mock.