Transformers: Dark of the Moon

I can’t think of the last time that a major Hollywood popcorn flick had a scene of such poor taste that I literally scowled for the rest of the film.
By Lindaon October 27, 2013
0 Comments
Our Rating 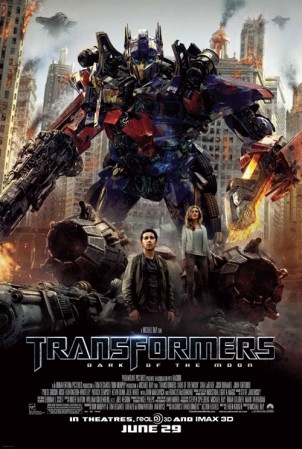 Now give me a moment as I go back and re-read my reviews of the previous Transformers films, which I will just call Transformers and Transformers 2. Hmm… there seems to be a pattern: 3 slices for the first movie, 2 for the second, and now 1 for the third. I honestly thought about going lower, but I have a confession: We don’t have a “No Pie!” rating capability in our web design. Doesn’t THAT suck.

So, clocking in at 2 1/2 hours (which seems to be 2 1/2 weeks when you are wearing clunky 3D glasses over your existing prescription glasses), Transformers: Dark of the Moon picks up a couple years after the last action took place. The lapse explains how Sam Witwicky (Shia LeBeouf) has dumped one girlfriend (buh-bye lippy Megan Fox), replacing her with a new blonde Barbie doll (the vacant trophy girl Rosie Huntington-Whiteley), and how he has received all sorts of medals and Presidential Recognition (for saving the world… twice!) in the meantime. There is a ridiculous amount of set-up, including plots about Sam trying to get a job (insert bizarrely small roles for John Malkovich and Ken Jeong), and a history-reinvention-recap of the last 50+ years regarding the space race. You see, the reason the moon landings were stopped was because a conspiracy about an alien ship that had crash-landed on the dark side of the moon! Buzz Aldrin (Yes. The real guy.) even shows up to explain this (at this point I slapped my palm to my forehead).

As far as I could tell, the deal was this: The spaceship on the dark side of the moon had a snoozing Transformer named Sentinel Prime (voiced by Leonard Nimoy) who was Optimus Prime’s predecessor in ass-kickery supposedly. He is brought back to Earth where the U.S. military (headed by Frances McDormand, who better have had a helluva paycheck) plugs him in and brings him back to life. Turns out the crashed ship on the moon was an escape vehicle from the war on the Transformers’ original planet Cybertron, which was destroyed in the war between the Autobots (good guys) and Decepticons (bad guys). Sentinel Prime has a bunch of rod-things that are apparently VERY valuable, and have the power to basically open a wormhole between two worlds and unleash power and fury to destroy the universe. Or something. Hell, I didn’t really care what the heck was going on. Let me instead offer some bullet points:

Some Transformers have hair or old-man beards. Others wear capes. Some inexplicably bleed or spit. What is going on here? Luckily, unlike in the second film, none of the Transformers have balls, though apparently they are all boy-bots, as Bumblebee almost falls over agog the first time “he” sees the hot chick. Creepy.

Speaking of the robots, how come when they are in vehicle-form, they are totally shiny and perfect, but when they transform to their robot-selves, their paint is scuffed and they are all beaten up? On that note, why would a robot plane need a robot to fly it? Isn’t that inefficient design?

At one point the hot chick girlfriend stands, vacantly agape, facing the camera as buildings and robots and planes blow up in soft focus slow motion in the background. Her hair blows slightly. The camera makes love to her. That is her role.

The only other woman of note in the film, Frances McDormand, seems to be running the military show, but insistently and repeatedly refuses to be called “ma’am” by those under her command. She never offers an alternative respectful title. She just barks, “DON’T CALL ME MA’AM!” This is never explained, but apparently was important enough to repeat several times throughout the movie.

John Turturro seems like he has tipped onto the other side of crazy in this film. It is like he has realized how ridiculous it is that these movies have become the biggest (at least in box office) of his career. He laughs like a lunatic and doesn’t really make any sense, but at least he seems to be having a good time.

The lovely Alan Tudyk shows up in a small, throwaway, yet scene-stealing role as a German bodyguard/computer genius/ninja (who knows?) named Dutch. I didn’t quite understand who he was supposed to be, but he made me laugh. Alan Tudyk, take a bow for offering the only smile (and earning the only pie slice) in a movie that I really really hated.

But you are all wondering what in the film caused me to bristle so much. OK, it is one thing to blow up the Lincoln Memorial and have a robot metallically tongue Lincoln’s decapitated head (you do NOT do that to Lincoln!), but it is another thing entirely to launch a Space Shuttle as a plot point, then blow it up on purpose, visually mirroring the Challenger tragedy… all in the name of entertainment! Wow. I mean, really. Wow. I told a friend about this scene in disbelief, and she said it perfectly, “That is NOT cool.” You could almost sense a layer of frost build up in the audience at that moment. Who ever, EVER thought a scene like that would be a good idea in a cheesy summer flick? Some of the audience was won over by the end (maybe from exhaustion?), but I actually scowled through the remainder of the film.

Like the bloated, never-ending destruction of the city of Chicago that seems to last for hours during the “climax” of the film, Michael Bay and his ilk just don’t seem to know when to stop. All I can say is, “Please make the Transformers series end. For the love of all that’s holy, PLEASE!”