Transformers: Revenge of the Fallen

Thinking of the millions and millions of dollars poured into films like the 2 1/2 ass-numbing hours that is Transformers: Revenge of the Fallen fills me with summer blockbuster ennui and malaise. 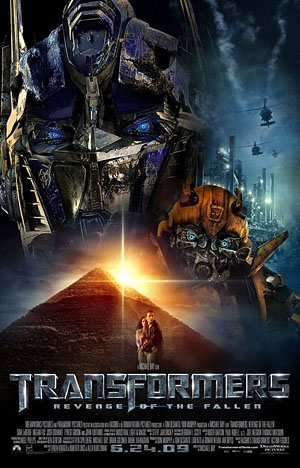 As I staggered out of the theater after seeing Transformers: Revenge of the Fallen, I was asked what I thought of the movie. I wailed in dismay, “I am SOOOO not the target audience!” Hollywood keeps throwing millions and millions of dollars at crap like this, and, in turn, the film will make millions of millions in box office. And then I start thinking of how that kind of money could feed the hungry in our country, or help pay to fix the healthcare industry, or build houses for the homeless… and then I am filled summer blockbuster ennui and malaise.

As you may know, I kinda hated the first Transformers movie. I writhed in my seat with boredom and hostility as robots crashed together all fast-like, interspersed with robots crashing together in slow motion. Lots of shit blew up, interspersed with occasional human reaction shots of horror and fright to remind us that lives were at stake, see?

Honestly, I thought about copying my review of the first film and renaming it Transformers: Revenge of the Fallen: The Review! But then I realized that as much as I hated the first film, there were parts of it that I kind of missed in Transformers: ROFL… I mean ROTF. Blurring my summer past blockbusters together, I had to confirm that Transformers 1 indeed had a hottie chick computer hacker and a jovial chubby sidekick to hang out with Sam Witwicky (Shia LaBeouf). Now the sidekicks have been pared down, introducing a new screaming-like-a-schoolgirl college roomie Leo (Ramon Rodriguez) and bringing back crazed conspiracy government dude John Turturro (does it matter what his character is named)?

Oh, yeah. And Megan Fox returns as Sam’s foxy girlfriend Mikaela. After doing so little to become famous in the first film, Fox returns to scream at Sam, “Why don’t you ever say you love me?!?!” whenever they catch a breath, while they run and run and jump off things and race around in fast cars. When she first appears on screen, she has the most succinct character introduction as she literally draped over a motorcycle, clad in skimpy short shorts and a tight tank top (the girl is clad, that is, not the motorcycle). For being splashed all over all the marketing campaigns for this flick, poor Megan Fox gets the most laughs of the film. And the audience was laughing AT her, not with her.

To justify having another movie, there is a grasping stupid-ass plot that the Decepticons are after a shard of that big cube thing that was destroyed in the first movie. Yay! We destroyed the cube ! (First movie ends. Second movie begins…) No, ooops! Our bad! We just found a piece that has been in Sam’s pocket for TWO YEARS (new movie unspools). Let the chaos begin again! (But don’t worry: At the end of ROFL, this time they make it very clear that there is potential for a sequel.)

Lots of stuff blows up, Mikaela chases Sam, there are robot smack-downs, and plenty of jokes are recycled (like Bumblebee playing cheesy car-radio songs to embarrass Sam). But Michael Bay asked himself, “Hmmm… what else does this film need?” So he came up with the baffling bright idea to have sexual robot jokes. We get to enjoy a robot HUMPING MIKAELA’S LEG and another monstrous ‘bot with GIGANTIC BRASS BALLS. Um. What? WHAT?!?!? (Shaking head in defeat, burying face in hands… sobbing quietly…)

So if you love this kind of shit, Transformers: Revenge of the Fallen is for you (smiling my broadest fake smile and giving an encouraging thumbs up). If, however, you are a human with half a brain, please avoid it at all costs. At least try. Come on, do it for me. Give me hope that the art of movie-going hasn’t completely gone to hell in a handbasket.