Transformers: The Age of Extinction

If you’re up for 165 minutes of Michael Bay action lacking any sort of purpose or heart, Transformers: The Age of Extinction will be right up your alley. However, if you like a little direction in a story or actually want to feel something when you watch a movie, you’re probably safe skipping this one.
By Jenniferon October 13, 2014
0 Comments
Our Rating 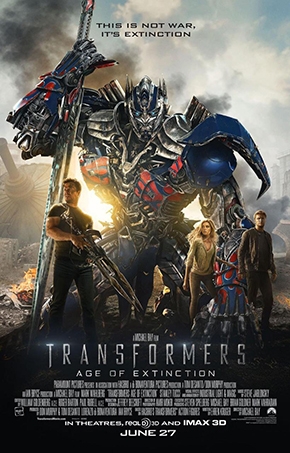 Transformers: The Age of Extinction kicks off like a folksy commercial for lemonade. Just picture a father and daughter living alone in a big Texas farmhouse surrounded by fields and the glow of pink country sunsets. The father, a widower, is a fairly unsuccessful inventor and the two take care of one another in the manner of people who have suffered a profound loss. The father’s goofy assistant is a fixture around the farm, adding comic relief, and a somewhat defective robotic dog greets you at the front door. It’s all pretty idyllic and relatable…until a Transformer shows up, followed by Black Ops Agents, followed by two more hours of tedious smashing and chasing action.

Mark Wahlberg stars as Cade Yeager, the widower father and quirky inventor who takes home a beat-up semi truck in hopes of breaking it down for parts. He soon discovers that it’s Optimus Prime, a very famous, very wounded Transformer. He fixes it up to the best of his ability, but instead of reporting it to the government and claiming a reward, Cade wants to hold off and study the Transformer a bit. If he can figure out how it works, it’ll help with his inventions. Except someone else spots the truck and calls it in, and a swarm of sinister agents descend upon the farm, ultimately blowing up the house and sending Cade, his daughter Tessa (Nicola Peltz), and friend on the run. Things look pretty bleak until Tessa’s secret boyfriend (Jack Reynor) swoops by in his souped-up race car and saves the day. After that, things get a bit far-fetched.

From this point forward, the movie basically lacks any sort of sense. Our heroes (and Optimus Prime) are essentially fugitives, Black Ops agents are hot on their trail, and somehow we’re also supposed to care that a slightly evil and very opportunistic businessman, Joshua Joyce (Stanley Tucci), has been sucking the brains of dead Transformers to build new Transformers for military use. You’ve got good Transformers, bad Transformers, man-made Transformers, oh, and also these dinosaur Transformers from the Arctic who apparently made our dinosaurs into metal, blowing our whole killed-by-an-asteroid theory out of the water. So basically, the world has problems. We need to rewrite our textbooks and we’ve got intelligent robots running amok and the whole world is corrupt. Sound like a mess? It looks like a mess! Essentially the mess translates to endless chasing/running and lots of Transformers transforming and smashing around like big metal bullies. Naturally, the whole dog and pony show, or war, or whatever you want to call it winds up in Beijing, where everyone can crash through crowded city streets and scale tenement towers. This is essentially just product placement for China, which ties in nicely with product placement for Imax, Budweiser, Armani, Gucci, and Victoria’s Secret.

If you’re up for 165 minutes of Michael Bay action lacking any sort of purpose or heart, Transformers: The Age of Extinction will be right up your alley. However, if you like a little direction in a story or actually want to feel something when you watch a movie, you’re probably safe skipping this one. Though the human element is established early in the film, it’s weakened by the characters’ interaction with one another. At the beginning of the movie, Tessa (a weird reincarnation of Tara Reid) is disappointed and bitter over the fact that there’s no money for college. Her initial frustration is then carried through the film, with her baselessly distrusting her father and constantly making digs about him failing to protect her. Um, like, when? When he doted on you for the past seventeen years? The last time the Transformers came to town? Her boyfriend too is unnecessarily dismissive, “I’m not here to save your daughter. I’m here to save my girlfriend.” Seriously? There’s no call for this underlying disrespect, and it weakens the bonds between characters. Shoot, if they don’t want to save each other (or, more pointedly, save poor Marky Mark), why should we care what happens? Also, the world is sort of ending, but the action is so nonstop that no one has any time to get worked up about it. We don’t feel a sense of impending doom, but we do have to ride out the serious bummer. There is no feel-good action set to a crazy ass hair metal song, no sense of triumph, relief, or summer movie magic, just endless running and morphing and noise, and if you see the 3-D IMAX experience, you may be looking at endless motion sickness. While some 3-D images work well, panoramic shots and shaky-cam scenes are dizzying and create a sense of vertigo. It’s never a good sign when you spend two thirds of a movie fantasizing about running to the bathroom and throwing up. I’m pretty sure it was the IMAX, but the plot could have had something to do with it as well.