Transsiberian combines two things that rock my socks off: cold, wintery climes (in this case, Russia’s Siberia) and trains (woo-woo!). There hasn’t been a memorable train movie that I can think of since Runaway Train, but Transsiberian, in my opinion, invokes some of the most enjoyable cinematic train thrillers. You may even hear the term “Hitchcockian” applied to this film, and heck, I wouldn’t be one to argue.
By Lindaon September 23, 2013
0 Comments
Our Rating 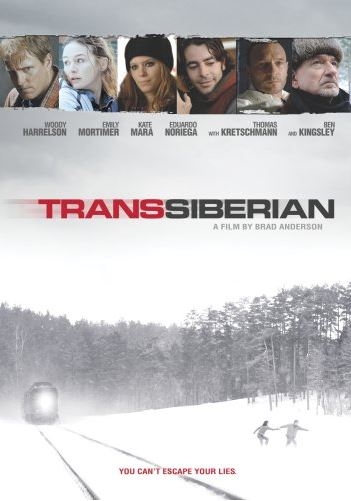 Woody Harrelson, doing his best “aw-shucks” American persona, and Emily Mortimer (flawlessly hiding her British accent) play Roy and Jessie, a married American couple returning home from a save-the-children volunteer stint in Beijing. They’ve decided to take the long way home, across the Asian continent on the Trans-Siberian Railway. They seem super-nice, the perfect couple that teasingly cajole each other with affectionate kidding. Taking the train is just a way to extend their time away just a little longer… at least that is what Roy thinks. It turns out that Jessie may not be as sweet and nice as she seems on the surface.

You know that all sorts of shifty things happen on trains, so Roy and Jessie’s nice little jaunt takes a mysterious turn when they are joined in their cabin by a couple of backpackers, the shifty yet super-hunky Spaniard Carlos (the super-hunky Spanish actor Eduardo Noriega) and his quiet and nervous American girlfriend Abby (Kate Mara). Roy, of course, only thinks the best of people, but Jessie is not quite so sure about them. It doesn’t help that Carlos is flirty and Jessie may actually be a bit bored with Roy. And since strange things always seem to happen on trains, soon people are getting left behind at train stops, casual photographs become incriminating, stacking Russian dolls are not what they seem, sexual tension keeps building between travelers, and some drug runners’ loot goes missing. Meanwhile, a Russian detective (Ben Kingsley, with a Boris Karloff accent) is searching for said drug runners, but he, too, may have other things on his mind.

The film is as non-stop as a train hurtling across the dusky, snowy plains, and its twisty mystery always keeps you guessing. It’s a delight to see Emily Mortimer get a complex role where she isn’t a complete angel or victim, and she becomes the center point of the unfurling chaos. Harrelson’s Ray may be as simple and good as he seems, but Mortimer’s Jessie has got things in her own past that she is not revealing. Noriega proves again that he can be both sinister and amazingly sexy, and Mara adds complexity to what could easily have just been a girlfriend role.

Ultimately, Transsiberian is a fun, claustrophobic thriller that had many in the audience (including myself) covering their eyes. And, let me tell you, next time I’m on a train I’m going to make sure the windows open. You know. Just in case.