(Untitled) is, unfortunately, kind of (boring) and kind of (obvious) in its portrayal of the (pretentious) New York hipper-than-thou art world.
By Lindaon February 8, 2014
0 Comments
Our Rating 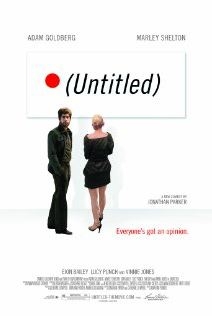 Adam Goldberg plays Adrian, an Adam Goldberg-type… you know, he is scowly, moody, full of disdain for humanity in general, and explodes with rat-tat-tat verbosity about how he is obviously the smartest one in the room. In a word, he is a pretentious ultra-urban snob. This time he is a musician that makes such edgy random “music” (clatterings, yowling, kicking of buckets, rattling of chains) that is so grating that only a handful of people show up to his group’s performances.

Out of duty, his brother Josh (Eion Bailey) is at a performance with a maybe-date Madeleine (Marley Shelton), a hot chick who happens to run a gallery, and wears exceptionally loud fashion-forward clothing (my favorite recurring joke in the film). Josh, is, in fact, a more successful artist than Adrian: Josh is a painter who is mass producing art for a hotel chain. The film kind of mocks Josh and his paintings that all look the same, but he feels passion for his work, even though in the art world he is not taken seriously. But does that mean he is a lesser of an artist simply because his work is accessible? Madeleine, however, is impressed with Adrian’s noise, describing her emotions towards it (as art) surprisingly eloquently. Madeleine and Adrian end up in bed.

And that’s where (Untitled) kind of lost me. It attempts to break down the definition of art by mocking crazy-town artists like the Vinnie Jones character Ray Barko, who hangs bovine from the ceiling bedecked in pearl necklaces, or a recluse named Monroe (Ptolemy Slocum) whom Madeleine “discovers” when he presents a thumbtack pressed into a white wall (so… challenging!). A software millionaire collects art simply for investment purposes, leaving an apartment of ridiculous hangings, unusable furniture, and other distracting knick-knacks. And while they are all being mocked, I’m assuming we are supposed to believe that Adrian is the true artist here, when in fact I found his brother Josh to be the only sympathetic one in the group.

When Adrian hits a wall (with one of his singers snapping, “Who’s writing this shit? It’s stupid! It’s shit!”), regroups, then gets a creative spring in his step… it turns out he starts composing what sounds like… music? Does that mean he’s a sellout? Is creating art the others may actually like really all that bad?

So, what is art? Strangely, Madeleine’s nice speech about finding meaning and emotion in creativity through art is completely cancelled out by the rest of the film. (Untitled) wants to mock what it seems to be wanting to celebrate, but its message ends up just being uneven, and it just doesn’t work.