Vertical Limit is one of those films that all you need to do is sit back, open your eyes wide, hold on to your chair, and enjoy the ride. 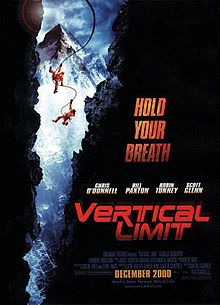 After the first 20 minutes or so of harrowing scenes, multiple-character introductions, and mumbling mountain-climbing mumbo-jumbo, I leaned over to my Japanese friend, who sat wide-eyed, enthralled, yet confused, and asked her if she knew what was going on. She shook her head no, so I wrapped it up for her: “There is a brother and a sister. They both climb mountains. After a few years of not seeing each other after a bad accident, they meet at one of the tallest mountains in the world. The sister is there to bring a very rich man to the top of the mountain, because he wants to make a TV commercial for his new business. There is an accident, so the brother and others must go save his sister and the rich man at the top of the mountain.” Aaaah… OK… that is really all my friend needed to know, because other than those plot basics, Vertical Limit is one of those films that all you need to do is sit back, open your eyes wide, hold on to your chair, and enjoy the ride.

Chris O’Donnell (with lovely, fluffy, growing-out hair) and Robin Tunney (who kicks butt, but has odd eyes that are too close together, in a way that kind of distracts me) are the estranged siblings, Peter and Annie Garrett. Bill Paxton, one of the worst actors in the world, plays the rich man Elliot Vaughn, who I think is loosely modeled on Richard Branson, the British über-successful businessman who tried to fly around the world in a hot-air balloon (among other adventurous things that only rich people can afford). Except Paxton is an ass, and of course has a dark side. Let’s just say that he is not a millionaire (billionaire?) that you want to be stuck in a crevasse with at 26,000 feet. After the botched ascent, where Annie, Vaughn, and leader Tom (Nicolas Lea from The X-Files) get trapped in said crevasse, brother Peter is the only one who refuses to just let them die on the mountain. So he and his rag-tag group of rescuers go up K2, hauling along cylinders of nitroglycerine strapped to their backs to blow the survivors out of the ice (not kidding! remember, you need explosions in an action movie!).

Now, I’ve heard others criticize Vertical Limit for having a lack of character development. But for an action movie, I could actually tell these people apart, and kind of cared about them, even though I knew that most of them were going to die dramatically… You don’t go to a movie like this for the actors to pensively stare off in the distance and flashback to a softer-focus time. You want a big piece of ice to fall on their head! Yeah! And Vertical Limit totally delivered in that sense. There is really no time wasted in this film, as just when one character survives a physical test, another one or two gets swept down the mountain by an avalanche.

Vertical Limit is the most fun, stressful, and edge-of-your-seat time that I’ve had at a big-budget Hollywood flick in quite awhile, and that’s nothing to shake an ice-axe at!