Though the atmosphere is cool and evocative and the actors are game, it seems that this movie should be more… fun. Instead it is simply exhausting.
By Lindaon July 12, 2016
0 Comments
Our Rating 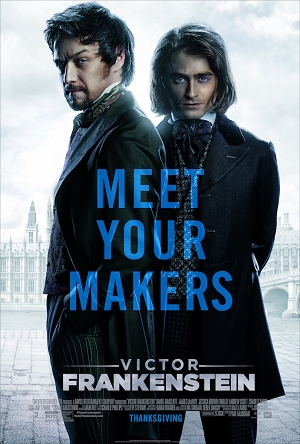 Since every adaptation of anything these days has to have a twist, this time we meet Victor Frankenstein through the eyes of a sad-faced clown… or rather a sad-faced hunchback (Daniel Radcliffe) who is rescued from the circus by mad-doctor Frankenstein (James McAvoy) when he sees the clown perform an emergency medical maneuver on his beloved acrobat girl Lorelei (Jessica Brown Findlay). Frankenstein is impressed, and busts the hunchback out of his circus cage, gives him the new name of Igor, and dubs him his new assistant in his mad experiments.

Victor Frankenstein works best at the beginning, establishing the mad experiments in Victor’s basement, where he is cobbling together body parts and zapping them alive with electricity. The first experiments are crude and horrific. Not yet experimenting on a cobbled-together human, wild-eyed Victor has instead pillaged zoo animals. When a sort-of chimpanzee beast, rotting, with flies coming out of its ribcage, springs to life, it is truly shocking and abhorrent. It’s moments like this that victor Frankenstein is at its best.

Unfortunately, the film feels a little frenetic, kind of like McAvoy’s wild eyes. Radcliffe’s Igor tries to be the soul of the film, as he runs between the beautiful acrobat Lorelei back to the possessive Victor. There is more than a little homoeroticism in the film, which would have been vaguely interesting, if the characters had actually acted on it. Instead, a “girl” is thrown into the story, with little importance (and a waste of Findlay’s talents), just so someone can have a kiss at the end.

By the time the story gets to the climax, where Victor is taking the final step of bringing a dead man back to life, aka the Frankenstein story we all know and love, I was sleepy. I was also wondering if this was actually the climax, or if the movie was going to keep going with townspeople-and-pitchforks chasing the monster while he dilly-dallied in a field full of daisies. I really couldn’t tell if it was planning on wrapping up, or if it was going to keep going and going. It may have had to do with having two margaritas before the film, but by the end I was kind of exhausted.