Welcome to Marwen not only left my eyes dry and my heart hollow, I found it to be a tiresome exercise in style over substance. 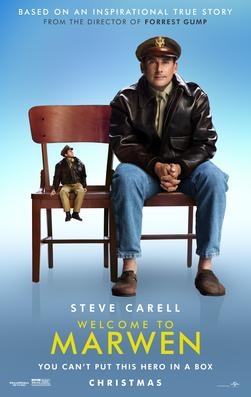 Two things before we get started:

1. I haven’t seen the acclaimed documentary Marwencol, which inspired this film, and purposely didn’t see watch it in the weeks leading up to the screening because I wanted to see Welcome to Marwen with virgin eyes so that I wouldn’t make comparisons between the two in this review. And…

2. Based solely on Marwen’s effective trailer and my cursory knowledge of Mark Hogancamp’s real-life story, I fully expected to be a weepy mess watching it.

To say that I was disappointed on all fronts would be an understatement. Welcome to Marwen not only left my eyes dry and my heart hollow, I found it to be a tiresome exercise in style over substance, in which the filmmakers were so clearly enamored with the possibilities of CGI that no one remembered moviegoers might also be interested in things like a compelling story, a structured narrative and more than 12 seconds of Janelle Monáe in human – not doll – form.

Directed by Robert Zemeckis and set over the course of about a week, Marwen revolves around Hogancamp (Steve Carell), who survived a vicious assault three years prior but lost his memory – and significant portions of his identity – in the process. Riddled with horrible PTSD, he copes by building a miniature Belgian village in his yard, and skillfully recreating and photographing Second World War scenarios starring dolls that resemble the people in his life. His doll, Cap’n Hogie, is a brash, brave American soldier who’s repeatedly beaten by Nazis and saved by a band of fearless female fighters (played by Monáe, Merrit Weaver, Gwendoline Christie and Eiza González), but tormented by a “witch” named Deja Thoris (Diane Kruger) who wants Hogie all to herself.

In the days covered by the film, a comely new neighbor named Nicol (Leslie Mann) moves in across the street; a smitten hobby-shop owner (Weaver) works up the courage to ask Mark out; Mark tries to steel himself to attend the sentencing hearing for his attackers; and a local gallery prepares to launch an exhibit of Mark’s photographs.

There’s a lot going on and a lot of potentially rich cinematic territory to mine. Too bad more than half the movie is inexplicably made up of repetitive vignettes starring the dolls (!).

Over and over and over again, Marwen is interrupted with fantastical WWII battles between the computer-animated dolls. After the first few, I thought, “Surely, these will be leading somewhere, and there’s a point to having them constantly bring the proceedings to a screeching halt.” Nope. Not really. And those vignettes eat up valuable screen time that could otherwise have been given to, oh I don’t know, Mark’s story, some character development, linear storytelling and more. Talents like Monáe, Christie and Kruger are relegated to basically being voice actors here, and Mann’s Nicol is so saintly, sweet and sensitive that she feels like she fell right out of Forrest Gump.

Surprisingly lacking in heart and emotion (especially given the subject matter), and jumping back and forth in time at random to its own detriment, Welcome to Marwen has a number of strikes against it, not the least of which is its tone. Is this a comedy? An inspirational drama? A story about trauma and recovery? A fantasy? It’s never clear, and it doesn’t ever feel like it strikes the right note. Carell (whom I usually love) feels miscast here – he portrays Hogancamp’s PTSD episodes with the same voice and demeanor as his “AHHHHHHH, KELLY CLARKSON!” waxing scene in The 40-Year-Old Virgin, so it comes off as though he’s playing those scenes for laughs when, obviously, they are meant to be anything but funny.

The film doesn’t really tell much of Mark’s story beyond skimming the surface, and even that winds up confusing and unclear. His assailants are anonymous caricatures, his recovery is only briefly mentioned in passing, and I spent the entire movie wondering who Wendy was and why she was so profoundly important to Mark. I’m still not sure and, by the time the film stumbled to its climactic – and shockingly inert – courtroom scene, I no longer cared.