This film is basically a snarky “Get off my lawn!” love/hate letter from one generation to the next.
By Lindaon July 12, 2016
0 Comments
Our Rating 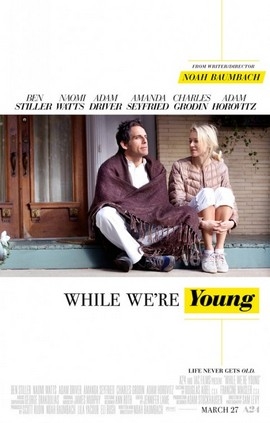 Ben Stiller and Naomi Watts play a childless 40-something couple that realizes that (technically speaking at least) they are (gasp!) middle aged.

Now, let me put this review on pause for a moment. As I watched this film, I quickly realized that they are exactly my age. In fact, just tonight, I was griping to a friend about the annoying millennial hipsters and their craving of “authenticity”… whether it be drinking “artisanal” cocktails out of Mason jars or making creaky animated gifs out of scenes from 90s TV shows. I was basically shaking my cane and wanting to punch these kids in the collective snout while being a tad bit jealous at their seemingly endless disposable income for entertainment and energetic excitement about everything. Whee! (As I sit down with an exhausted wheeze and put my teeth back in the glass on the nightstand.)

Anyway. Ben Stiller’s Josh (and to a lesser extent Watts’ Cornelia) meet and crush-out on a hipster 20-something couple named Jamie (Adam Driver) and Darby (Amanda Seyfried). The younger couple live in Brooklyn (of course), listen to vinyl records, have a chicken, and watch VHS tapes. How authentic! Josh and Cornelia marvel at and are lured by these seeming mirrors of their youth, who represent to them the freewheeling spirit that they left behind. Jamie is a fledgling documentary filmmaker that has not only actually heard of Josh’s rarely seen films, but can describe scenes! Josh is flattered. Josh sees what he used to be in Jamie’s enthusiasm.

But after overdosing on BFF-ness with their new buddies, Josh and Cornelia’s own enthusiasm starts to wane. Almost like the emotional hangover after a thrilling affair, the shine of Jamie and Darby starts to fade as the older couple starts to see cracks in the youngsters’ hipster facade. Whether or not Josh and Cornelia learn anything from the experience is the question.

Writer/Director Noah Baumbach is a sharp screenwriter who always has zingers of quotable lines up his sleeve, and While We’re Young is no different. This movie had me guffawing several times with its sharpness and wit. But like the shininess of new friends, after the fact I saw some cracks in the facade that made it a little less shiny. Does anyone in this world have to work? Why does Ben Stiller, even a straight role, always end up whining? And what the heck did Naomi Watts character *do* (if anything)?

As the cat’s let out of the bag on Jamie’s motivations, Darby gets probably the (yes) most authentic scene of the film. It is at that point you realize that, though entertaining, While We’re Young could have been more than skin-deep laughs. In the meantime, get off my lawn, g-d hipsters!