Strange to think that Tina Fey has to go to war to emerge with a film as funny as she is.
By Lindaon July 12, 2016
0 Comments
Our Rating 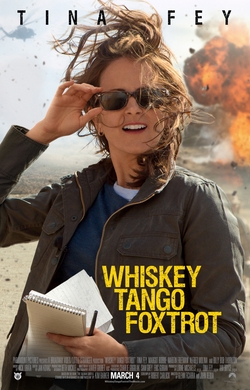 Based on the memoir The Taliban Shuffle by journalist Kim Barker, Whiskey Tango Foxtrot takes us into the weird, absurd, adrenaline and sex-fueled world of being an expat in a foreign country. It’s where a fish out of water can land in a puddle with other discombobulated fish, except they all happen to be foreign journalists in a war-torn country. For Kim Baker (the film drops an “r” from her name) she has dropped into this journalist-expat “Kabubble” in Kabul, Afghanistan, where a woman who is a “6” at home is a solid “Kabul 9” on the piece-of-ass scale. Who knew?

Kim is a forty-something news copywriter who accepts a war correspondent job in Kabul in 2003, because, she thinks, why the hell not? She’s unmarried, kind of uncommitted to her boyfriend, and has no kids. As played by the always appealing Tina Fey, Kim is smart, funny, and doesn’t get ruffled to easily, for instance when she is greeted by a local woman screaming, “Cover yourself, shameless whore!” She is ballsy and fearless and often a bit clueless, but she really feels like she has nothing to lose, and wants to make this reinvention of herself work.

Fey is surrounded by a talented, funny cast, and the sharp script made me guffaw. Margot Robbie plays the hot lady journalist Tanya (who fully admits she is a “Kabul 15”), Kim’s compadre and professional competition. Hobbity Martin Freeman has fun playing against type as hard-drinking Scottish Lothario who has his photo-journalist eye on Kim (well, on her Kabul 9 ass). Christopher Abbott’s interpreter Fahim is the sweet, stable soul of the film. And, unsurprisingly, the scene-stealer is Billy Bob Thornton, with his drawl and deadpan droll delivery, perfect as a Marine general who occasionally gives Kim an insider’s scoop.

Yes, taken as a commentary on “war is hell”, Whiskey Tango Foxtrot could be seen as aloof and dismissive of the war in Afghanistan. But, as it cleverly points out, America and the U.S. media was itself dismissive of the war, shortly after it started. As Kim scrambles to find a really good story that will get her back on the air (What will it take? Interviewing a Taliban warlord?) she realizes that the adrenaline rush of the constant danger is not reality. Close calls for some of her friends are a reality, and a terrifying one. It’s all fun and games until someone loses an eye (or, in this case, their life). But until the inevitable sobering reality check, I found Whiskey Tango Foxtrot to be funny. Really really refreshingly funny.