With its “as subtle as a rock-to-the-head” metaphor for another marginalized and abused people, it is unclear who the intended audience is for this weird and strangely watchable story. 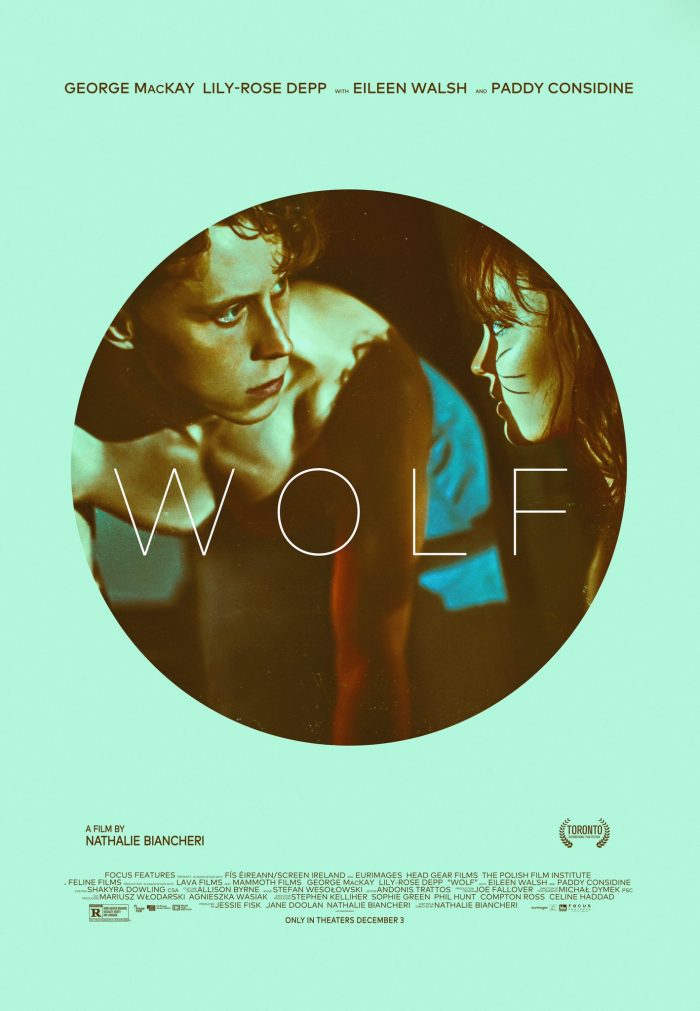 When I was a kid, I loved this show called Lucan, about a boy who raised by wolves. It was the TV era of championing outcasts as superheroes, like The Incredible Hulk and The Bionic Woman, and like so many 70s television shows, it starred a hot young guy with feathered hair. Lucan, the boy, was ostracized by other kids because of his wolfy upbringing. When he acted out, he’d crawl under the kitchen table on all fours and growl. I loved it. Of course the show was cancelled almost immediately. I was crestfallen.

Now in the new millennia, we have Wolf. Jacob, the young man in Wolf, was not raised by wolves, however. He thinks he IS a wolf in the wrong body. He wants to howl at the moon, walk on all fours, and craves the forest. But he wants to “get better” and agrees to get therapy at a special institute for people like him… humans that suffer from “species dysphoria”.

Run by a smiling (read: sadistic) leader (played by Paddy Considine and referred to as The Zookeeper in the credits), the institute houses a gaggle of other species-identified humans (German shepherd, panda, squirrel, etc.) The patients look grim and dispirited, with dark circles under their eyes. They only seem to have a zest for life when they get to act/flap/crawl as their identified true selves. You know that the therapy isn’t exactly working, though, especially when it is immediately apparent that the methods are clearly and frighteningly abusive.

Is this movie meant to be a very poorly veiled metaphor? Is it meant to be cheeky wink to a knowing audience, who, like myself, have seen the exact same movie when it was called Boy Erased? Or The Miseducation of Cameron Post? Or any of the many documentaries, like Netflix’s Pray Away, about conversion/aversion therapy for homosexuals and/or transgender people? Because of this, Wolf straddles a very thin line of respect vs parody–very thin–bordering on being offensive. But as it follows the traditional story arc of those parallel real-life horrors, you realize that there is a strange sincerity to the proceedings.

The cast plays it all completely straight, so to speak, making the film surprisingly solemn. There is a point where Jacob (George MacKay) sneaks out of his room at night to roam as his wolf-self. In the darkened hallway, you see him turn a corner on all fours, his loping gait totally–and impressively–lupine. The rest of the cast is also solid: Fionn O’Shea is sweet and dopey as German Shepherd; Darragh Shannon breaks your heart as Squirrel; and Lily-Rose Depp is, well, fine as Wildcat, as an inmate who has been there way too long and serves as the token love interest for Jacob (isn’t that inter-species hanky panky? just askin’…).

That said, I’m not sure who the target audience is for Wolf. Is it for progressive-minded people that see it as a not-very-veiled metaphor for how mainstream society treats LGBTQ people? Or is it for people who have an aversion towards those same people, aiming to make that audience more sympathetic to their struggles? It’s as murky as the moonlit night that Jacob craves. Wolf is inherently watchable, but puzzling in its point.