Despite an intriguing true story, there are multiple times during Woman in Gold where you find yourself counting on your fingers and scratching your head trying to sort out the timeline… including how Helen Mirren, whose face has less wrinkles than mine, is supposedly playing a woman in her 80s.
By Lindaon July 12, 2016
0 Comments
Our Rating 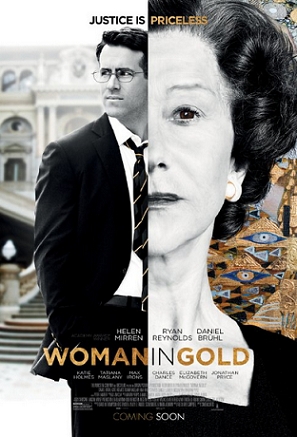 There are just about no greater villains of modern history, both cinematically and in reality, as the Nazis. Images of the stiff-armed salutes, the crisp uniforms, the shiny boots, and–just as horrific–the smiling and waving crowds lining the streets as the motorcades drive by, can still bring chills to those of us that weren’t alive during one of modern time’s most darkest hours. In Woman in Gold, the juxtaposition of wartime Vienna, Austria and modern(ish) day Los Angeles is startling. When we see a young Jewish woman, Maria Altmann (Tatiana Maslany), fleeing her Vienna home with her husband in a flashback, it is bizarre to imagine that they end up in California, of all places.

But to backtrack (or fast-forward, rather), in the late 1990s, the now elderly Maria Altmann (the far from elderly-looking Helen Mirren) has just buried her sister, and is going through their family’s artifacts. Pulling out a worn tourist postcard of one of the most famous paintings in the world, Gustav Klimt’s Portrait of Adele Bloch Bauer I, she laments how the portrait is of her own beloved Aunt Adele, and how the gold-gilded painting was stolen by Nazis when they looted her family’s treasured possessions. Maria wants restitution. Enlisting the help her friend’s son, the not very successful lawyer Randy Schoenberg (Ryan Reynolds, earnest yet bland), she decides to try to get the painting back.

Woman in Gold plays like law-drama lite. As Randy bumbles through his investigation, you’d almost think, “Hey, that doesn’t look so hard!” For instance, Randy and a very hesitant Maria go to Vienna (her first time back since fleeing over 60 years earlier). They go to the archives, and within seemingly minutes, find the long buried document that no one has been able to find before. Even though they are rejected in their requests for the painting by the gallery and the government, Randy finds a loophole while browsing at a bookstore, and manages to get their case heard at the U.S. Supreme Court six months later. Wait. Did that say six months? Now, I’m not a lawyer, nor do I play one on TV, but despite the obstacles this odd couple face, even I could see that their case sure seemed truncated on screen.

The filmmakers only seem to give us years or dates to show passage of time when convenient. Otherwise we are left to guess. How old is Maria supposed to be? Didn’t Klimt paint very early in the 20th century? And what the heck happened to Maria’s husband? Apparently, showing Randy’s hapless wife (Katie Holmes) birth one infant, then another, is supposed to be clue enough that a few years are passing as he works on the case.

That said, Helen Mirren, as the most youthful-looking and sexiest 80-something I’ve ever seen, is unsurprisingly very good as terse but snappy Maria. Though the odd-couple-chasing-a-case feels more than a bit like a poor-man’s (or rich woman’s?) Philomena, the true story was engaging enough to keep me interested. I’ve heard that the book that the film is based on is very very good. To the film’s credit, the story has piqued my interest to read more about this fascinating case.