“Beat” Takeshi plays the titular blind swordman, a master of slicing and dicing, who wanders the land posing as a masseuse. 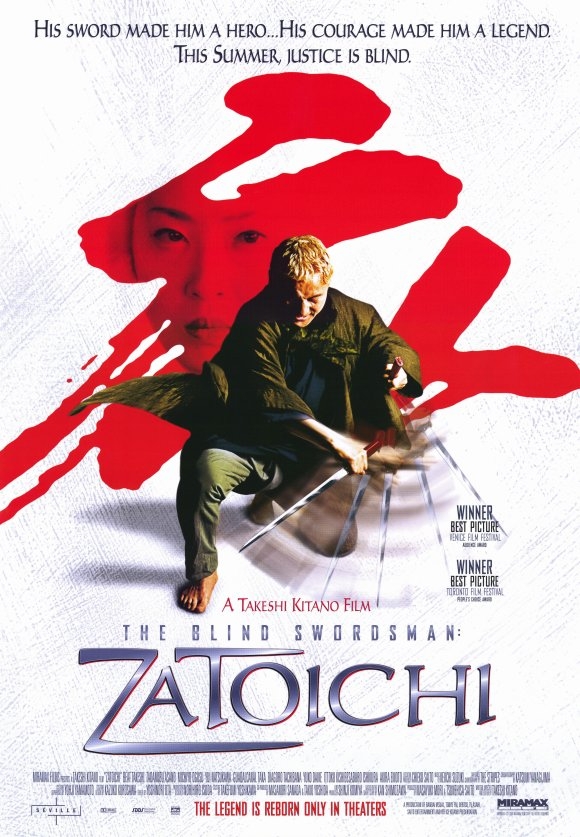 As the blood on the screen flew (OK, the CGI blood, but blood nonetheless), I stared at the backs of the heads of the pack of kids in front of me at the screening of Zatoichi. Now, I know that Takeshi Kitano’s interpretation of the classic Japanese pop-culture character who is a roving “blind masseuse” samurai was supposed to be a tongue-in-cheek interpretation, but sheesh, anyone who has seen his masterful film Hana-Bi (Fireworks) knows his tendencies for making blood splatter. Even if the violence was at times funny, Zatoichi is a really violent film that often made me wince (and the toddler in the theater shriek in confusion). After the closing credits, my suspicions were confirmed: this film was indeed rated R, not PG-13. For god sakes, people, GET A BABYSITTER.

“Beat” Takeshi plays the titular blind swordman, a master of slicing and dicing, who wanders the land posing as a masseuse. He charms his ways into homes with his ability to get the kinks out of your spine, but would be just as likely to carve a deep bloody X into your back. In the meantime, a ronin (sword-for-hire) samurai has hooked up with one of the local gangs, and seems to be the sword to beat. The ronin (Tadanobu Asano), an emotionless assassin, is taking this one last job to care for his sickly wife who has the dreaded Cough. Throw in a kindly older woman who houses the masseuse, the woman’s goofy son, and two mysterious geisha sisters who are not quite what they seem, and you’ve got sometimes a comedy, sometimes a drama, and sometimes ultra-violent samurai film.

With these main characters, you’d think the plot wouldn’t be too hard to follow, but the problem is that the framework of the rambling story is propelled by gang wars among at least three groups of gangsters, who were all indiscernible from the other, at least through my eyes. I couldn’t keep them straight, and the only compelling character among them was the badass ronin. Zatoichi himself goes unnamed throughout most of the film, until someone suddenly figures out, “Wait! He is not a masseuse! He is ZATOICHI!” But for those of us who didn’t grow up with the background information of the fame of this character, we end up scratching our heads and going, “Uhhhh… and Zatoichi is…?”

Zatoichi does have some fun. Though the violence is gruesome, some of it is entertaining in its outrageousness. There is some amusing slapstick-style comedy, but it seems out-of-sorts with the somber tone of some of the other decidedly adult subplots (like the background of the geishas). The balance doesn’t quite work.

However, Zatoichi, for some filmgoers, will be a crowd-pleaser. It won the audience award at the Toronto Film Fest, and Tarantino fans will probably get a kick out of much of the ultra-violence. But if violence, funny or not, ain’t your thing, you should probably skip this one.