At some point in Zoolander 2, Will Ferrell’s evil Jacobim Mugatu yells incredulously something along the lines of, “This is so STUPID!” Yes, yes it is.
By Lindaon July 12, 2016
0 Comments
Our Rating 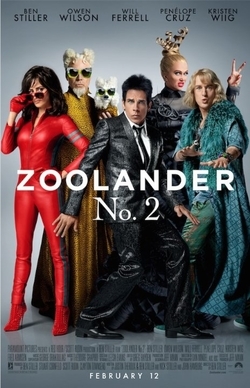 When the trailers forZoolander 2started being teased, I was surprised how many people I knew were genuinely excited about the movie. Maybe I was wrong when I thought that this was a sequel that no one asked for… Obviously there were a lot of people that loved the original movie, myself not included. Kind of like my feelings for Adam Sandler movies, Ben Stiller’s brand of comedy usually errs on the annoying and irritating spectrum for me, and I’ll sayZoolander 2 did not disappoint in that regard!

In an intro that was funnier movie trailer, the beautiful people in the world are being killed off one by one, including Justin Bieber who, after being shot a million times, still manages one last selfie, pursing his lips Zoolander-style. The reclusive Derek Zoolander (Stiller) is encouraged by a super-hot Interpol agent (Penélope Cruz) to come out of retirement, along with his man-model buddy Hansel (Owen Wilson), to help solve the international crime of the assassination of beauty. Throw in a weak, predictable subplot about Zoolander attempting to build a relationship with his the teenage son that was raised

Basically, Zoolander 2 is an excuse to cram as many celebrity cameos into a film barely held together by fashion tape. There are a LOT of people in this film, harkening back to the Naked Gun style cameo where you throw in as many famous faces as possible to see what sticks for laughs. Most of it isn’t very funny (for instance, fashion icons like Tommy Hilfiger and Anna Wintour should stick to the drama of fashion), some are head-scratching (what the hell, Fred Armisen???), and some that should be brilliant (Sting?!?!) fall flat. Credit goes to a few scene stealers like Kiefer Sutherland, a sensitive member of Hansel’s relationship-orgy, Benedict Cumberbatch as a genderless supermodel named “All” (brilliant), and the unrecognizable (and completely unintelligible) Kristen Wiig as fashion queen Alexanya Atoz.

But meanwhile, we get to see Stiller purse his lips a lot, slip in and out of Zoolander accents, and be the dim bulb model that fans apparently love. Count myself surprised that it took the appearance of Will Ferrell, about 2/3rds through, to finally punch some energy into the film, too little too late. Imprisoned by the fashion police since the last movie, his Jacobim Mugatu, with poofy hair buns, a (literally) petrified little dog, and an earnest sidekick (Nathan Lee Graham, who also made me laugh) is unsurprisingly (spoiler!) behind the whole scheme.

But by then we really don’t care.