You inevitably start counting the dead gay guys, hoping that they’ll find themselves dead relatively quickly so you can get on with the rest of your evening.
By Lindaon September 23, 2013
0 Comments
Our Rating 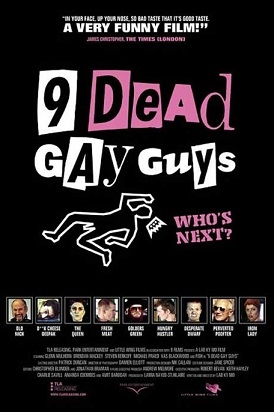 Right off the bat, a movie like 9 Dead Gay Guys is an attention-getter. Gasp! So saucy and un-politically correct! It’s British and hip! It has flashy editing and camerawork in the inevitable style of Lock, Stock and Two Smoking Barrels and/or Trainspotting! It has an angry dwarf! But like many films that have knocked off that style, it gets exhausting very quickly, and you inevitably start counting the dead gay guys, hoping that they’ll find themselves dead relatively quickly so you can get on with the rest of your evening.

The Queen is dead! The Queen, being a flamboyant hipster in some technicolor corner of the London gay scene, where a couple of bumbling Irish lads named Byron and Kenny get by, offering their services to those gentlemen with fat wallets. Byron and Kenny—they’re not gay! (they claim)—hear rumors that the Queen’s lover, one Orthodox Jew that goes by the name Golders Green, has a stash of money in the big bed that he and the Queen shared, and the Irish boys (and everyone else) want a piece of it. Everyone else includes the aforementioned angry dwarf, a trio of hot and hung African brothers, a big mean gangsterish dyke, and blah blah blah. In the quest for the loot, the gay guys start to get knocked off one by one, hence, well, the title of the movie.

9 Dead Gay Guys is not awful, but it is the type of movie that makes your head hurt. This short-attention-span filmmaking style is relentless: A snappy one-liner here, a spinning camera shot there, bright glaring colors all over the place. Can I help it if after the film, I just wanted to pop a couple ibuprofen and lay down in a warm, dark, and quiet room?